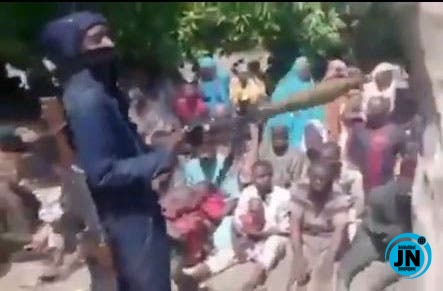 The Middle-Belt Journalists Forum,( MBJF), has called on the Federal Government to ensure the immediate rescue of the students of Government Secondary School, Kagara, Niger State, who were abducted several days ago.

In a statement signed by its President, Mr. Jonathan Ipaa, the MBJF said “It is of the strong view that the innocent students do not deserve the misfortune of staying a day longer in the unimaginable conditions of their captivity in the hands of terrorists who are masquerading as bandits, hence the need to swiftly rescue them unharmed and return them to their parents and schools to enable them to continue with the pursuit of their academic careers”.

“With this rather unfortunate chain of events and other security challenges nationwide that give the semblance of a recurring decimal, and giving away the nation as a failed state, it has become obvious that Nigeria’s security architecture has collapsed and the nation is currently facing an insecurity emergency that can only get worse if nothing is done to rescue our sinking ship.

“Government must show a stronger commitment to the protection of lives and property, as unequivocally enshrined in Chapter 2 of the 1999 Constitution (as amended) to which our leaders have all sworn to abide by, observe and execute to the letter. This can be done by adopting an intelligence-driven, proactive approach to security as opposed to the present reactionary, knee-jerk approach by the security agencies to such incidents”.

According to them, “It goes without saying that if you do something the same way all the time, you can only get the same result, but when you try something new, you will surely get a different result. Since the national security architecture has obviously crashed, a new drastic approach to Nigeria’s security challenges is what is needed now to secure not just our schools but the nation at large.

“We therefore strongly demand, within our statutory rights, and as professionals tasked with holding leaders accountable to the people, that government should not only hasten to rescue the Kagara school pupils but as a matter of emergency, come up with a broad, effective, and achievable way of securing the country, to avoid the imminent collapse of the nation in the no distant future”.

‘Mama Go Back To Sleep Oh’ - Followers React As Tonto Dikeh Reveals What She Woke Up Thinking Of
“Na Set Up…” – Ric Hassani Advises Peruzzi To Fall Out of Love
‘My Son!’ - See This Adorable Video Of Wizkid And His Last Son Everyone Is Talking About
“I Hope He Is Not Into Drugs” – Fans Express Worry Over New Photo Of Phyno