Lagos division of Court of Appeal has over 4,630 appeals, 6207 motions pending - JustNaija

Lagos division of Court of Appeal has over 4,630 appeals, 6207 motions pending
Posted by 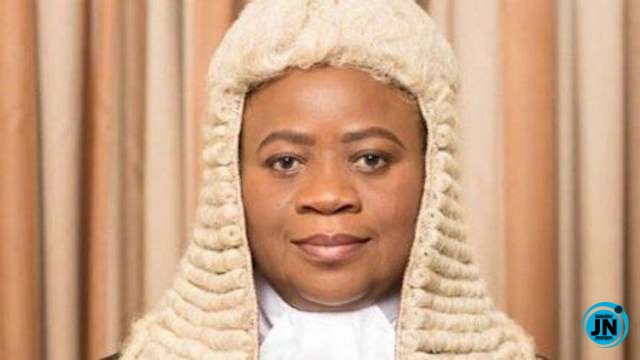 
She stated that there are a total of 345 appeals, comprising of 289 Commercial Appeals; 10 Human Right Appeals; and 46 Criminal Appeals which are scheduled for a hearing.

According to her, the 345 scheduled Appeals for hearing represents only 8% of the total number of Appeals in the Lagos Division. The task ahead may appear daunting, but we are resolute in our determination to decongest the Court.

Justice Dongban-Mensem, further stated that the Working Retreat consists of special court sessions involving 23 Special Appellate Panels, adding that due to time and space constraints, the Panels will sit in batches of six Special Panels on the designated days between the 7″ and 10″ of December 2020, from the hours of 9 am to 12 pm daily.

“Each Panel will hear about 15 ripe appeals with Five Panels sitting at five designated Courtrooms of the National Industrial Court, Ikoyi and one panel at Court 1 of the Court of Appeal here in Lagos Division.”

She stressed that it is their aspiration that the exercise should be a continuous one in their various Divisions until the backlog is greatly reduced.

“Undoubtedly, the Court of Appeal, Lagos Division, is a critical Division within the Court. It sits at the commercial nerve center of our great Nation, Nigeria. Despite this, the Division has continued to experience a timeless delay in the hearing of appeals before it, largely due to the volume of appeals in its docket and the limited number of Justices available to hear them,” Dongban- Mensem.

She also said that the retreat is expected to feature special Court sittings by all Justices of the Court of Appeal from all the divisions of the court.

Dongtan-Mensem stated that on the assumption of office, she discovered that majority of these Appeals, had either been abandoned or purposely left to linger endlessly by mischievous and flippant actors in the litigation process.

“It is also regrettable to note that a good number of these appeals were filed with the aim of stalling the judicial process. ‘This situation must certainly not be allowed to continue. We have come out to demonstrate our abhorrence by taking the bull by the horn,” the Justice added.

Justice Dongban-Mensem stated that the purpose of the retreat is to send out a warning to the public that the Court will no longer be a dumping ground for those who seek to hamper justice delivery in Nigeria.

” We are presently 70 in number, 20 less than the statutory requirement of 90 Justices of the Court of Appeal.it is also hoped that these special sittings will promote the collegiate spirit, which the Court is renowned for. Thirdly, our actions this week will afford us all a chance to discuss various aspects of our work, health, and wellbeing.”

“It is my desire and expectation that under my stewardship, delays in the hearing of Appeals will become a thing of the past, not just in Lagos Division but also in other divisions of the Court of Appeal,” she said.

“Also incorporated in these special sessions are enlightening and educative presentations from erudite and educative personalities and professionals such as Mrs. Folake Solanke, SAN, who is the First Woman to attain the Rank of Senior Advocate of Nigeria as well as being among the first indigenous publishers of a Law Report in Nigeria. We especially thank the Learned Silk, who at 88 years of age is present to make a presentation to us, despite the risks to her health arising from the COVID 19 Pandemic.

These sessions begin at 5 pm every evening and will not only refresh our minds but also positively impact us. The paper presentations cover an array of topics such as Health, Information, and Communications Technology (ICT) and reminders about the revered traditions of the Legal Profession.”

The Appeal Court president expressed her appreciation to the various heads of Courts.

Also at the program was professor Taiwo Osipitan SAN, who represented the Body of Senior Advocates of Nigeria, called for the review of the qualifications of senior advocates, stating that most of the frivolous applications at the Appeal Court were being filed by lawyers in order to meet with the prerequisite to becoming a member of the inner bar.

Lagos division of Court of Appeal has over 4,630 appeals, 6207 motions pending