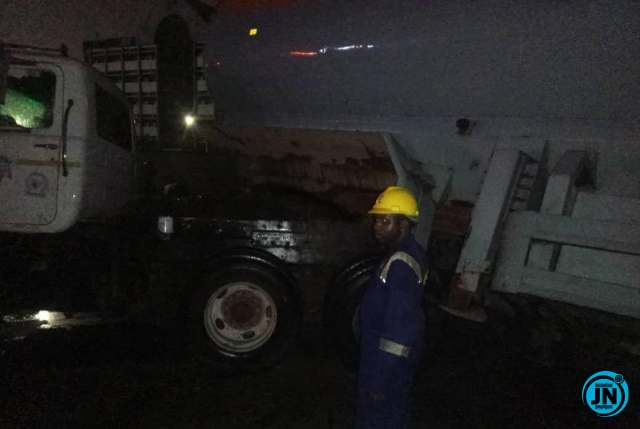 A responder at the scene of the incident.

Several properties worth billions of naira were saved from being gutted by fire when the driver of a tanker conveying 55,000 liters of Premium Motor Spirit, PMS, while trying to negotiate a bend suddenly overturned and spilled its contents along Kirikri Road, Apapa, Lagos.

The incident which occurred at about 2am Thursday, according to a source caused panic among residents and road users in the area as emergency responders battled to avert any possible outbreak of inferno.

At press time, emergency responders, including men of the Lagos State Emergency Management Agency, LSEMA, state fire service, police officers among others were collaborating to manage the scene due to a large number of stationary and parked vehicles within the vicinity.

Director-General of LASEMA, Olufemi Oke-Osanyintolu, who confirmed the incident said, “Transloading of the content into another tanker is presently ongoing.

“The agency’s heavy-duty equipment has been mobilized to recover the remains of the tanker from the road. Operation in progress.

“The broken down truck was later towed off the road by officials of the Lekki Concession Company to complement the efforts of the traffic officers.”

For the Alakuko incident involving a tanker with number plate FST 32 XL, Adeseye stated that the driver lost control while negotiating a bend at the roundabout inward the Sango Tollgate, adding that the content spilled on the road.

‌“The Agege Fire Station salvaged the situation and oversaw the trans-loading of the remnant petrol into another tanker with number plate MUS 52 XP. The tanker, which was on its way from Apapa to Master Energy PFS, Ekoro in the Oke Odo area of Alimosho, was later towed away to ensure the free flow of traffic,” she added.