“I lost my pregnancy after Kaduna govt demolished my restaurant” – Owner of restaurant where Kaduna sex party was scheduled to take place, says
Posted by 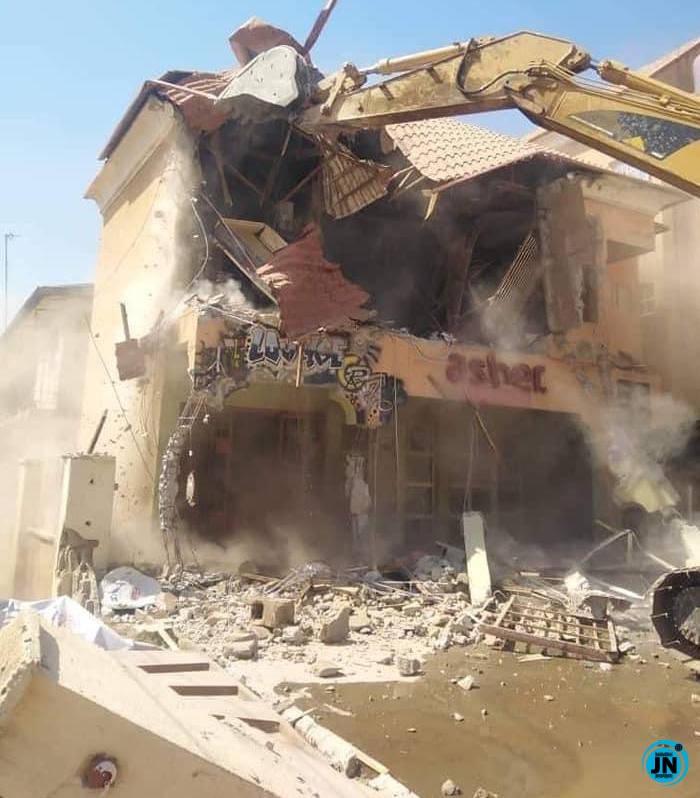 The Kaduna state government has demolished a building where a sex party was scheduled to hold in the state, following the arrest of the organizers.

Recall that Kaduna State Police Command arrested organizers of the maiden edition of a “Kaduna sex party” which was slated to hold in the northern state.

The party which was scheduled to hold last Sunday was called off, as promoters of the party were arrested before the D-day and the venue pulled down.

However, the owner of Asher Kings and Queens Restaurant in Kaduna State, Aisha Mercy Yakubu, has denied plans to hold a sex party.

In a statement, Yakubu stated that she had no idea that such a party was scheduled to hold in her facility.

According to her, the organizers reached out to her and asked to use her premises for a “15-man reunion and clothing line promo”.

She further revealed that she was never informed about the demolition and was only aware of it when the government officials had begun to pull down the building with her properties inside. Adding that, the trauma led to the loss of her one-month-old pregnancy.

The Asher Kings and Queens Restaurant is 34 sitting-capacity- at-a-time restaurant, located at #75 Kachia Road, Sabon Tasha, Kaduna State, registered with the Corporate Affairs Commission, with with the registration number BN2463851 on 5th December 2016, under the COMPANIES AND ALLIED MATTERS ACT 1990 Food Production and Processing Services.

The Restaurant is a one-story building structure, with a VIP Lounge section, where premium customers relax to watch football league games in a cozy environment, with all the comfort; air conditioners and light music.

Whilst the ground floor is where the kitchen and serving spot is, also with chairs and tables for customers to sit and eat their food as required. We hire/rent the VIP section for light events, of not more than 26 customers.

On the 27th December 2020, a customer hired the VIP Lounge for a 15-man reunion/Clothing line promo, to appreciate his customers for their good patronage of his brands.

Before the event proper commenced, a friend of mine and I noticed an unusual movement around the main gate to the restaurant, as it was half opened to avoid a crowded environment. We approached the main gate and on getting there I saw two truckloads of heavily armed officers of the Nigeria Police Force (NPF).

I asked the team leader what was going on but he ignored my question and said he will explain to me when we get to the Police Station, Sabon Tasha Division. When we arrived at the Police station, my customer, who accompanied me to the station, enquired what the matter was and the Police showed us a poster on a GSM phone belonging to one of the officers by the name Inspector Felix. It was a poster of an event titled; KADUNA SEX PARTY, which the Police claimed the venue for the supposed “sex party” was scheduled to hold at my restaurant, even though with no address of where it will take place on the poster.

I denied knowledge of that event as there was nothing of that sort taking place at the restaurant and I wouldn’t stoop so low to entertain such illicit activity at my place, but the Police refused to believe me and had my friend and two of my staff detained for one night, one day until the customer that had earlier hired the place for usage on that fateful day was also arrested the next day. They were released after paying a “bail fee” of #100,000 to Inspector Felix and one other lady Officer, fair in complexion.

I noticed how incompetent the NPF was. I suggested to them to call the number on the supposed “Kaduna Sex Party” poster, which they immediately put a call through and a name came out using the True Caller App as MARVELLOUS AKPAN. The Police asked me to pay a fee of #20,000 for them to do their job of tracking the usage of the phone number, which I immediately paid them so that they will swing into action.

Marvelous Akpan was arrested the next. He was interrogated and he obliged to owning the phone number on the poster and print of the poster which was posted on Social Media, assisted by a friend of his named Noah and one other guy.

On further interrogation, Mr. Marvellous Akpan confessed to the Police that he doesn’t know me and has never been to my restaurant nor have any knowledge of its address.

Mr. Chimeze, who had hired the place was released, summarily, after the successful arrest of Mr. Akpan. The next day, 31st December, while at the other Branch of my restaurant, at Court Road, Sabon Tasha, Kaduna, a friend of mine called me asked me to go to the main Restaurant and see what was going on. I immediately went and saw a combined team of Policemen, Soldiers, KASTLE, and Vigilante groups guarded a Payloader to demolish my restaurant.

No prior notice was served to me before the demolition, there was no form of communication between me and the Kaduna State Property Development Agency (KASUPDA) who came to demolish the building structure. Even when they arrived at the location, the main entrance to the Main Restaurant and the restaurant was under lock and key. There was no form of communication to me! I watched them pulled down the building without allowing me to remove any item before the demolition.

As a result of the trauma, I lost my one-month-old pregnancy. I also incurred the following losses; 1. cooking utensils 2.furniture 3.Electric appliances 4. Chillers 5. Deep freezers 6. Bearings outdoor catering utensils 7. Cash, et al worth over #32 million, as the place was abruptly vandalized after the demolition.

I plan to seek legal redress for defamation of my character and the loss of my properties in the building.

Davido Reacts To A Viral Video Where Guy Was Sacked Because He Doesn’t Like Davido
So Sweet! See Where Regina Daniels Tattooed Her Son Name On Her Body (See Photo)
‘Let’s dream of a Nigeria, where Boko Haram, bandits, others will be sad stories of the past’
‘Haters everywhere’ Actress Foluke Daramola cries out over what trolls did to her