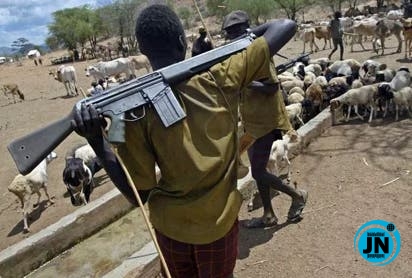 EBONYI State Government, yesterday,  described video and audio recordings circulating on the social media alleging that some Fulani Herdsmen were attacked and chased out of Ebonyi State as fake and false.

It stated that the viral video was the handiwork of enemies of the state and called on security agencies to fish out the perpetrators of the dastardly act.

Speaking with reporters, Secretary to the State Government, SSG, Dr. Kenneth Ugbala; and Attorney General and Commissioner of Justice,  Cletus Ofoke,  said that since the video went public, the security agencies and the Committee on Herders and farmers relationship have not received any report of such development.

Ofoke said: “Herdsmen and farmers Committee has become aware of the video suggesting that some Fulani herders and their families residing in Ebonyi were being attacked and chased out of Ebonyi. We didn’t witness or receive any report. Neither did we get information from the Association or security agencies.

“The video and audio in circulation are not the true positions of things. Each time there are issues we interact with them. We have channels of communication from LG to the state. We wish to state that there is nothing like that in the state.

On his part, Dr. Kenneth Ugbala described the message behind the viral video as misleading and an act of falsehood.

“I want to lend my voice to the speech made by Commissioner for Justice as regards the video and voice stating that our brothers and sisters are having issues. It is a falsehood. It is not true.

“Through the person of the Governor, we have enjoyed peace with our brothers who are herders. We can no longer remember the issue of clashes between herdsmen and farmers. The video is from the pit of hell. It was perpetrated by the enemies of the state.

“Such information cannot be traced to any part of the state. There is no such record before the security chiefs. This is the most beautiful holiday we have had so far. Such video and recorded voices never happened in Ebonyi State.

“The security agencies will fish out those behind this wickedness. What the law states about such misdemeanor will take its course. The Public should discountenance such anomalies.”

Also, Ebonyi MACBAN in a communique read by its Secretary, Alhaji Dani, said: “The audio and video in circulation on social media platforms alleging that herdsmen were being attacked and chased out of Ebonyi State are false, fake, misleading and orchestrated attempt by mischief makers and enemies of peace. The Association is enjoying in Ebonyi State; the video is to cause disharmony between the peace-loving people of Ebonyi State and Fulani Herdsmen resident in Ebonyi State.

“Herdsmen resident in Ebonyi State have cohabited peacefully with their natives and host communities without any fear, molestation, threat or intimidation to them or their cows.

“On the 2nd of January, 2021, one of the herdsmen resident in Ebonyi State particularly at Ozigbo village by name Alhaji Adamu informed the Association of his intention to relocate to Taraba State with his family for according to him, he has been given a title that would warrant him staying in their village and that he would seek greener pastures for his cattle while in Taraba State.”

In tandem, the Ebonyi State Commissioner Police, Philip Maku through his PPRP, Loveth Odah dismissed the video as fake.

“To set the record straight, the Command wishes to state that on the 2nd of January, 2021 one Fulani herdsman Alhaji Adamu residing at Ozibo village in Nkaleke Ichaba/Enyibishiri Community in Ebonyi L.G.A of Ebonyi State decided to relocate with some members of his family to Taraba State in-search of greener pastures for his cows as the dry season is setting in.

“For the avoidance of doubt, Alhaji Adamu left seven other members of his family (Alhaji Musa Danfo and six others) who are still residing at the same settlement with some of their cattle.

“Therefore, the Command wishes to re-emphasize that before this video the Command has no record of a threat to the lives of the peace-loving herders or their cows, neither to those residing in the said Camp nor in the entire state.

“It may also interest the public to know that the Fulani community yesterday being 2/01/2020 paid Christmas and new year visit to His Excellency the Executive Governor of Ebonyi State and nothing of such threat was reported.

“However, the mischief-makers and the enemies of the state made a voice record over the video to create panic, mislead the public and misrepresent the peaceful coexistence of the herders and their host communities in Ebonyi State.

“The Command, therefore, urges the general public to regard the video as fake, baseless and mischievous and go about their lawful businesses.

“Meanwhile, the Commissioner of Police Ebonyi State, Philip Sule Maku, has ordered a full-scale investigation into the matter with a view to arresting those behind the fake video for possible prosecution.

“The CP is also reassuring the general public particularly Fulani herdsmen and their host communities in Ebonyi State of the Command’s continued commitment to ensuring the safety and security of their lives and property.”