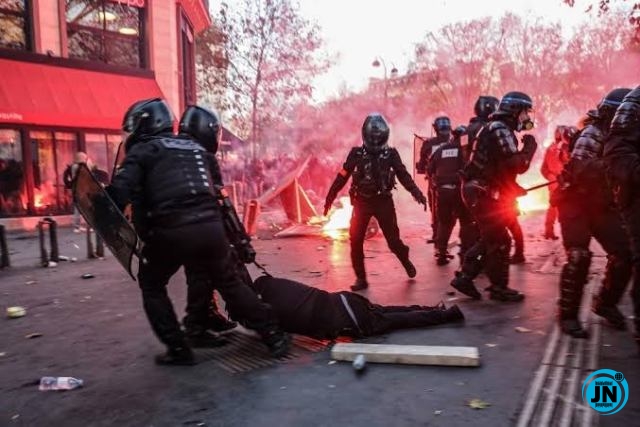 The Paris prosecutor’s office has charged police officers involved in assaulting a black musical producer in Paris earlier this month with intentional violence, according to a  Le Parisien newspaper report on Monday.

The report said that the officers had been placed in custody.

On Nov. 21, Michel Zecler, a black musical producer, was walking in the 17th district of the French capital without a mask, violating the state-backed health protocol.

The man saw a police car and went into his studio to avoid a fine, but was followed by law enforcement officers, who then physically abused him.

The French Loopsider news outlet published a video from a security camera showing the beating.

According to the newspaper, two of the four policemen taking part in the incident were taken into custody, and the others were placed under judicial control.

Three officers who were captured by a security camera footage were charged with “intentional violence by a person holding state power” and “forgery in public writing,” in line with the prosecutors’ request.

The fourth policeman was charged with “intentional damage to health” for throwing a tear gas grenade in the producer’s studio, which he claimed he did out of ignorance of the situation in a bid to assist the detention operation.

French President Emmanuel Macron has called the incident a “disgrace for France” after he saw the images of the beating.

The incident was followed by a series of rallies across France on Saturday against the new legislation criminalizing the display of images of police troops, which turned into violent unrest.