Fire guts 200 hectares of cocoa plantations in Ekiti, over 40 farmers affected
Posted by 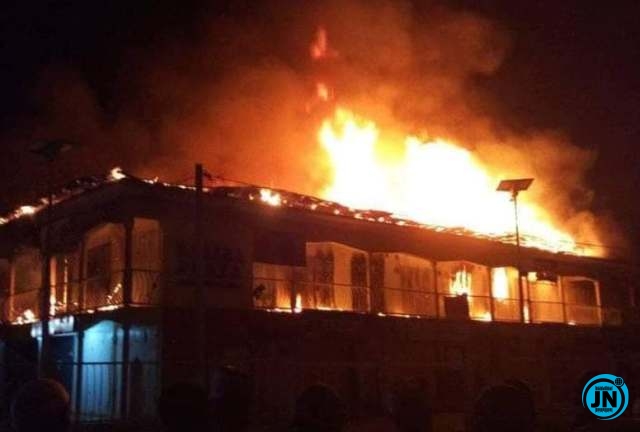 A fire at the weekend, the cause of which is yet to be ascertained, has gutted Cocoa and Kolanut farms covering over 200 hectares of land valued at several millions of naira in Ikoro Ekiti, Ijero LGA of Ekiti .

Capt. Sunday Adebomi, retired, Chairman of the Ekiti State Emergency Management Agency (SEMA) made this known during an assessment visit to the scene of the tragedy to ascertain the level of damage wreaked.

He listed other cash crops destroyed by the fire to include palm trees, orange trees, plantain, pineapple cassava, and maize farms.

The SEMA boss, who was accompanied on the assessment by the officials of the National Emergency Management Agency (NEMA), said the report of the incident was communicated to his office by one of the affected farmers.

While commiserating with the affected farmers, the SEMA chairman promised that the Ekiti state government would assist all the victims by giving them seedlings and chemicals as well as other relief materials in order to cushion the effects of the inferno.

” Cocoa and kola nut are two cash crops that had given Ekiti national recognition apart from providing economic supports to many citizens and we can’t afford to lose the comparative advantage we have been enjoying on these produces,” he said.

Also speaking during the visit, the NEMA Director of Operations in charge of Ondo, Ekiti, and the Osun States, Mr. Olusegun Afolayan, said the fire incident, which affected about 40 farmers in the area had rendered them jobless and losing their means of economic support.

He said; “NEMA and the SEMA have jointly visited some of the affected farm settlements for an on the spot assessment of the damage.

” We have found that more than 200 hectares of cocoa and other cash crops plantations were destroyed by the inferno.

” I will forward the report of the inferno and the plight of the farmers to the headquarters of the agency and ensure that affected farmers get compensations.

” Let me equally warn our farmers to always take precaution to avert recurrence”.

One of the affected farmers, Mr. Dosumu Oladapo, lamented the loss, which he said had brought sadness to him in view of the extent of damage done to his farm.

He also expressed shock over the incident, which he said, had rendered him jobless as he could not easily find an alternative job.

Oladapo explained that he borrowed money from a Cooperative Society in the area a few months ago to hire laborers to clear the farmland and purchase chemicals before the fire struck.

The farmer appealed to the government, private and religious organizations, as well as public-spirited individuals to assist the farmers to mitigate the losses.

Another victim, Mr. Olomu Eniola, also pleaded with the government, as well as well-meaning individuals and corporate organizations to come to their aid.

“I’m not the reason you didn’t get an invite, aunty” – James Brown fires back at Bobrisky after he mocked his AMVCA outfit
Rep Your State!!! Ogun Has Fireboy DML, Edo Has Rema, Which Fast-Rising Artist Your State Can Boast of?
Wizkid promotes Burna Boy, Fireboy DML, Tiwa Savage, Adekunle Gold, etc. albums on Instagram
Fireboy and Ed Sheeran's 'Peru' Claims New Certification in the UK