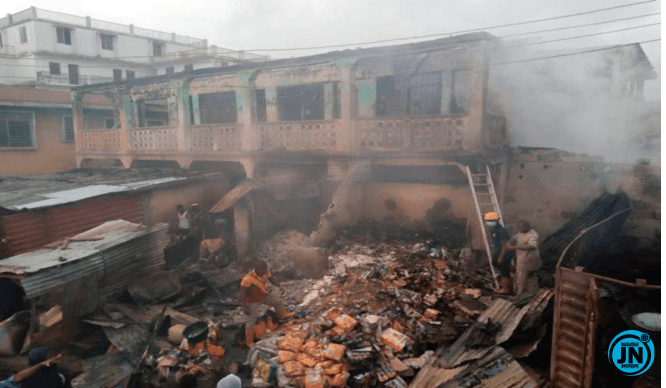 Yesterday March 17, about 23 shops and goods believed to be worth millions of Naira were destroyed in a fire incident at Owode market in Offa, Kwara State.

The fire reportedly started by 1a.m, however the arrival of firefighters prevented the inferno from spreading to other shops and houses in the vicinity.

The Head, Media and Publicity of the Kwara State Fire Service, Hassan Hakeem Adekunle who confirmed the incident said it is suspected an electric spark caused the incident.

“If not because of the quick intervention of the Fire Brigade, the disaster would have been greater. About 23 shops were affected due to the little delay in reaching out to the Fire Brigade. “The cause of the inferno was suspected to be an electric spark, even though the intelligent team of the state Fire Brigade is still working on that to unravel and ascertain the actual cause or causes of the fire outbreak.”

Akwa Ibom: Former minister advises against gov, successor conflict in 2023
A young Nigerian man has cried out after plumber removed 23 used condoms that was blocking the toilet in his uncle’s house
#BBNAIJA5: “She Was 23 In 2017, Now She’s 22” – BBNaija's Nengi Accused Of Lying About Her Age
2023: What north wants after Buhari — Prof. Mahuta