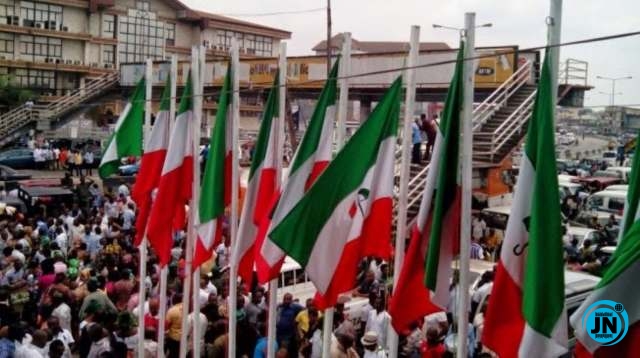 The Peoples Democratic Party (PDP), Caucus in the House of Representatives has called for caution from the Federal government in dealing with the youth, after the EndSARS protests that lasted for several weeks.

The caucus cautioned that government must follow “all democratic principles in dealing with those arrested due to their involvement in the protests, also said the rule of law must be observed in whatever measures the government is willing to take against them”.

In a statement issued and signed by its leader, Rep. Kingsley Chinda (Rivers), and made available to journalists on Monday in Abuja, the caucus “noted with trepidation that in the last few weeks the media have been inundated with news reports of actions taken by the government against #EndSARS Protesters and alleged supporters.

“These actions, which include seizure of Passports/Travel documents, freezing of bank accounts, court orders sought and obtained by the government against citizens, de-registration of companies perceived to be supporters of #EndSars by the Corporate Affairs Commission and arrests and prosecution of some genuine protesters, show the insidious and ridiculous length the government has gone in muzzling the rights and freedoms of citizens whose only offense is that they dared to speak truth to power and to a government that has become tone-deaf; on auto-drive and of course blind to the sufferings of Nigerians.

“Though it is the constitutional responsibility of government to maintain law and order, we believe that this purposive duty imposed by the constitution must be discharged in a manner that accords respect for the rights of citizens and within the bounds of the Rule of Law. So far, the actions of the government-speak volume of the way it continues to treat the citizens with disdain, stoking the flames of anarchy that would invariably devour the relationship between it and the citizens.

“When a government persists on the path of unreasonable and irrational actions, the tension that ensues between it and the citizens can only grow into civil resistance of citizens who consider it as an enemy and not partners in nation-building.

We do hope that the government retraces its steps and engages our youths as partners and not dissidents that must be treated with scorn and discredited for voicing their opinions on the many unfortunate happenstances in our country. This government must free itself from fifth columnists bent on derailing our democracy,”.

The lawmakers warn the government against “muddling up the genuine agitation of protesters with the subsequent hijacking of the protests by hoodlums who wrecked havocs including arson and looting of public and private properties worth billions of naira.

“We the PDP Caucus wishes to state that the attempt to equate the #EndSars protests with the looting, vandalism, and criminality exhibited in some cities, including some that did not participate in the EndSARS Protest, is not helpful for several reasons”.

According to the caucus” the EndSars protest through disruptive was largely peaceful until hoodlums were procured to disrupt the peaceful protest. Secondly, equating the two very distinct events – the peaceful protests and the violence that erupted after the peaceful protesters were sacked from the streets by thugs hired by principal elements in the government- obscures any proper scrutiny that should be undertaken of what happened and blurs pragmatic solutions to the immediate and remote causes of the problem. Thirdly, and finally, the deliberate hounding of peaceful protesters makes nonsense of the judicial panels of inquiry, as the actions of the government and clampdown on the genuine protesters, while an investigation into police brutality is on-going, are not only paradoxical but ridiculous and deceitful.

“We call on the government to show good faith to the Youths and Protesters by refraining from the freezing of accounts, seizure of travel documents, wrongfully but intentionally tagging patriotic Nigerian Youths as a terrorist, etc, and to give the various Judicial Panels of inquiry the unhindered opportunity to conclude their investigations. In fact, the matters before the Judicial Panels of Inquiry are “Lis Pendens”; and this is especially so now that the various Judicial Panels of Inquiry are hearing petitions and their proceedings serve as sufficient legal notices to President Muhhanadu Buhari to respect and protect the inalienable right to peaceful protest of citizens”.

Abuja Endsars Protesters Call Out Davido After He Did This |video
#EndSars: Angry Protester Refuses To Back Down Despite Being Flogged By Soldiers (Video)
Why I Haven’t Joined #endsars Protests After Returning To Nigeria – Dj Cuppy Reveals
Young doctor who treated injured #EndSARS protesters dies of COVID-19