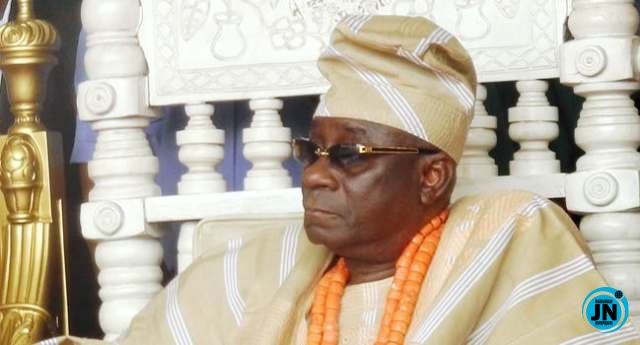 The Oba of Lagos, Oba Akiolu has stated that the problem with Lagos State is insecurity security and unemployment.

He further stated that the security architecture of the country needs to be restructured.

He said: “The problem we have in Lagos is security and unemployment. The youths have to be looked after. What happened is a pure case of a security breach. The entire system needs reformation.

“There is so much concentration of power at the centre. Mr President should assist in the rebuilding process of the affected states.

Oba Akinolu said the culture of our forefathers has been neglected. The gods are angry. Lagos should be accorded special status.”

Also, speaking, the Alawe of Ilawe, Oba Alabi, said “Taking a look at the unfortunate destruction of lives and property, the #EndSARs protest was hijacked by hoodlums in which Lagos suffered most devastation.

“The moment the hoodlums realized the police had been overwhelmed they took over control of the state and unleashed havoc.

“This must stop, the IG must deploy his men to the streets. The party for hoodlums is over.

“It is high time the police took over and also the police should be adequately equipped. The wanton attack on Akiolu’s palace is embarrassing. It is worrisome to commit such a heinous and sacrilegious crime.

“The security in palaces should be boosted because any time an incident like this comes up, after government, monarchs are the next target.

“The attack on Lagos and other states was a calculated attempt to decimate the economy of the South-West region. Otherwise, why would they attack NPA and other public and private institutions?

Also, Olu of Ilaro, Oba Olugbenle, said: “The issue of insecurity has been with us for years. In the 2014 National Conference, we spent weeks discussing Nigeria. The report has not been looked at. Nothing stops the current government from implementing the recommendations.

“The COS to the President was at the confab and he played crucial roles, and fortunately, he is now in government. Let us leave politics and look at the good sides of the 2014 confab and implement them.

“There is so much power in Abuja. It is time to have true federalism. Let FG reconsider its position on the closure of borders, the majority of our youths have been rendered jobless.’’