Debate relevance of NASS to Nigerians, not funding — Lawan tells critics
Posted by 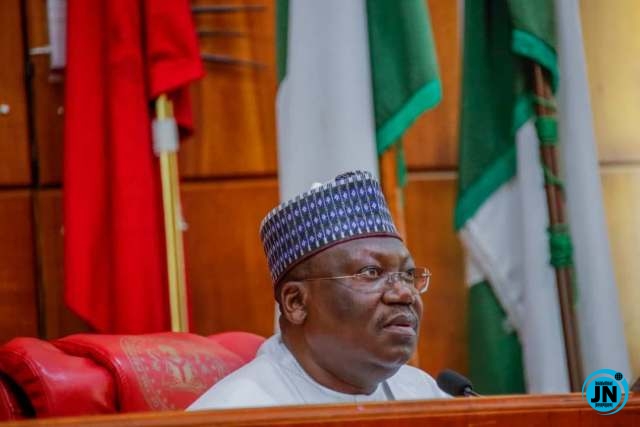 President of the Senate, Ahmad Lawan has challenged those critical of the National Assembly to a debate on the relevance of the Legislature to Nigerians rather than criticizing the funding of the Assembly.

“We need to understand what the National Assembly or what the Legislature is to Nigerians.”

Lawan called for a proper debate on what the functions of the National Assembly and Indeed the Legislature should be rather than talking about the jumbo pay.

“Where is the jumbo pay? we should be looking for value for money.

“Without this National Assembly or the Legislature across the country, what we have is no democracy anymore.

“So, the value of the National Assembly or the Legislature to Nigeria is democracy.

“Ask for what you think we should be doing rather than saying ‘close the Senate’ or ‘close the National Assembly.’ Do you understand the implication of this?

“You close the Senate, for example, not because I’m in the Senate but the Senate is a leveler.

“Because in the House of Representatives, the population is a major consideration and that’s why some States will have five or six members of the House and others will have more than 20.

“So if you say ‘close the Senate,’ you can be sure that there will be a day when people will cry foul of the tyranny of the majority.

“That gives everyone the advantage and the opportunity to be represented fully and properly and equally in the Senate.

“So that stabilizes the system. That tells you that that representation in the Senate that provides equality of states is to work to ensure that every part of this country is fully represented and protected.”

The Senate President said that the National Assembly is allocated less than one percent of the National Budget yearly.

“We will always argue ‘cut the funding to the National Assembly. ‘It’s bogus.’

“If you don’t like the set of members in the Ninth National Assembly, change all of us in 2023.

“Get better people but help support the system to function because that is your protection,” Lawan said.

“You won’t make heaven if you don’t pay tithe from that money” – Pastor drags Davido over N250M crowdfunding
Yul Edochie’s first wife, May replies fan who asked her to put up her account number for crowdfunding
Debate relevance of NASS to Nigerians, not funding — Lawan tells critics
Malaria gains threatened by access gaps, COVID-19, funding shortfalls — WHO