Kemi Filani News recalls that Ola Tinubu’s son, Seyi Tinubu, debunked reports that his father has tested positive for COVID-19 and was only in London for vacation.

Despite this, FFK is still insisting that APC leader, Tinubu is sick, and he doesn’t see the reason why it should be kept a secret. Taking to his Twitter page; he wrote;

”I have been informed that BAT is ill and is in a Paris hospital. It is no crime to be ill and neither should it be a state secret. All mortals fall ill from time to time. I join others in praying for him and I wish him well. May God grant him a speedy recovery and a safe journey home.”

It would be recalled that Bola Tinubu’s son, Seyi Tinubu, took to social media to cry out and debunk reports that his father has tested positive for COVID-19.

This is coming after reports spread like wildfire that the APC leader and politician is in France receiving treatment after he contracted the novel virus.

Reports have been rife online that the former Lagos state governor is currently receiving treatment for coronavirus in France.

In a post shared on his social media page via his Instastories, Seyi quoted his father’s spokesperson, Tunde Rahman, as saying Bola Tinubu has done the coronavirus test 15 times and all the tests have returned negative.

Tunde Rahman says the controversial politician is currently in the UK taking a vaccine for the virus. 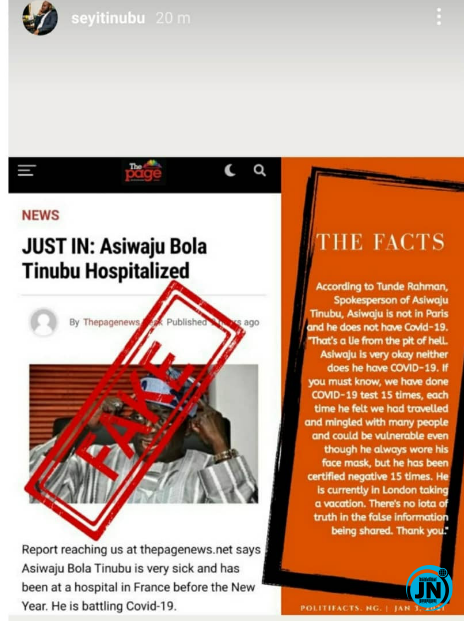 ‘He is hotter than Wizkid’ – Nigerians drag Wizkid as more photos of his first baby mama and her new man surfaces
ANOTHER MASSIVE WIN! Burna Boy Makes It To Rolling Stone's Top 500 Artists
“I’m basically the stone that the builder rejected” – Burna Boy says on his Grammy win
Teddy A celebrates his wife Bambam as she clocks 31