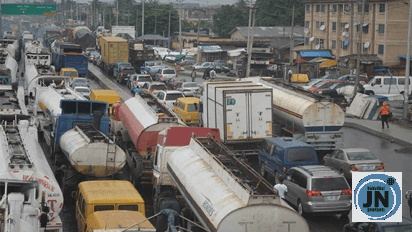 The Presidential Task Team managing the traffic gridlock on Apapa-Oshodi Expressway may have abandoned its duty, giving way to touts and hoodlums to take over the management of the road.

In their crude manner, the street urchins have unleashed mayhem on motorists, battering and extorting them to no end.

The most agonizing thing is that Vice President Yemi Osinbajo, Works Minister, Babatunde Fashola, and Kayode Opeifa, whose direct responsibility is to oversee the situation, keep mum as the traffic situation in the area goes worse.

Also, the Lagos State governor, Babajide Sanwo-Olu who should intervene to save his state appears not interested.

Some of the articulated vehicle drivers, who spoke to Vanguard, lamented that in addition to the humiliation they suffer in the hands of the touts, each truck is forced to part with not less than N50,000 to N70,000 every day.

One of the drivers, said the way they extort us, we may end up spending up to N100,000 daily before we are given access to our destination.

The situation has also increased the rate of accidents in the area. A source close to the Federal Road Safety Corps told Vanguard that a total of 57 road traffic accidents were captured on the axis between October 2019 and 2020 which claimed the lives of 16 people. The source also stated that 12 of the accidents were fatal and 22 minor cases.

When contacted, the Lagos Sector Commander of Federal Road Safety Corps, FRSC, Olusegun Ogungbemide said: “We are going to add more men on the axis pending the time a permanent solution will be found.

“The problem is a national one and needs input from all stakeholders including business operators around this corridor.

“I am aware that the Nigeria Ports Authority is addressing it by concessions Lilipon. They are trying to bring up the call-up system to effectively address the problem,” he stated.

Speaking to Vanguard, President of the Nigeria Union of Petroleum and Natural Gas Workers, NUPENG, Prince William Akporeha, said “the protest that followed the #EndSARS crisis led to the congestion in the ports.  Already, some parts of the country are experiencing a scarcity of petroleum products. Since Monday when normalcy started returning, our members (Tanker drivers), from almost all parts of the country are rushing to Lagos to lift products. The same thing for containerized trucks as truck drivers are trying to return empty trucks, while imported cargoes stranded in the ports are finding their ways out of the ports.

“If you check, because I was there very early today (yesterday), while we try to ensure that our members are orderly, other heavy-duty trucks are compounding the situation because we have no control over them. Unfortunately, the task force team members that were enforcing orderliness are now nowhere to be found probably because of safety concerns. So, all stakeholders need to cooperate to ensure the free flow of traffic.”

He dismissed the allegation that the union officials were collecting money to pass tankers, saying “those I saw today (yesterday) were touts and not union members. In any case, we do not collect union dues on the roads. People need to understand how NUPENG operates. Anybody can claim to be a NUPENG official to do anything unethical. That is one of the reasons we have a monitory team to ensure that unscrupulous individuals do not drag our name to the mud. We need to also call on the government to fix the roads leading to the ports and tank farms because if the roads are motorable, I am sure we may not be experiencing this problem.