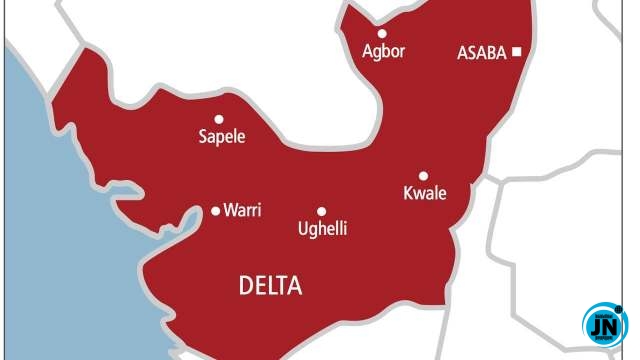 According to an eyewitness who spoke to Vanguard on condition of anonymity, two of the three suspects were caught after they have robbed a house at Emeberin street at about 2am.

He said the victim raised the alarm after the armed robbers left his house.

The vigilante group in the area swung into action and apprehended two of them, as residents in the area came out and beat the suspects to a pulp. Going further to set them ablaze.

The other suspect, according to the eyewitness, was later caught at Ojabugbe street, the next street where he was also beaten up and set ablaze by the angry mob.

Contacted, the Divisional Police Officer, “B” Division in Warri, CSP Benjamin Igometi in a telephone chat confirmed the incident to Vanguard saying, “They just called me now that some robbers came to attack in that area and they caught them and they were lynched. That’s what I heard.”

The Delta State Commissioner of Police, CP Mohammed Hafiz Inuwa, and the Police Public Relations Officer, DSP Onome Onovwakpoyeya are yet to pick calls or respond to text messages sent across to their mobile phones as at the time of filing this report.

Vanguard also learned that since the #EndSARS protest, armed robbers have been terrorizing the area without any resistance.

The vigilante group the area in an effort to secure the area, beefed up their game and when they learned that some armed robbers were in the area, they swung into action, rounding them up. Only for a mob to lynch, and set them ablaze to serve as a deterrent to others.

Men who don’t drink alcohol make the best husbands – Nigerian Lady
Moment Teni chased after Davido in Lagos to request for a collaboration
Bobrisky Showers Praises Of 'Love' To Bestie, Tonto Dikeh For Doing This
“That hug from Dorathy broke my heart” – Prince recounts eviction from BBNaija