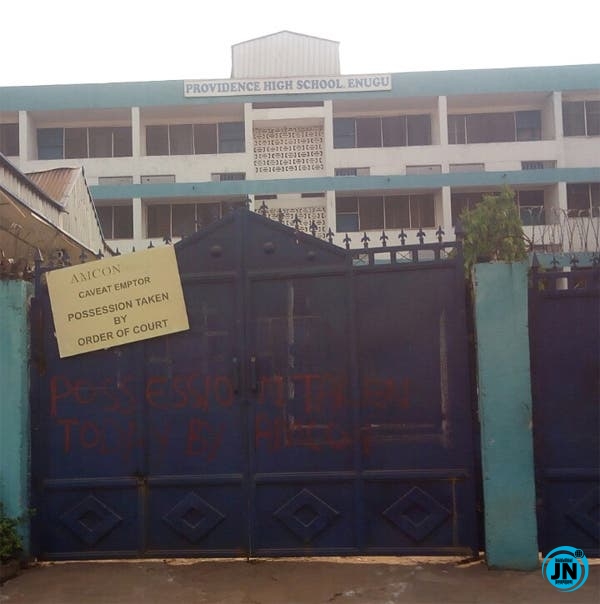 No fewer than 344 female students and staff of Providence High School, Independence Layout, Enugu were Thursday, detained in the school premises by officials of Assets Management Corporation of Nigeria, AMCON.

The AMCON personnel was said to have invaded the school premises and reportedly took possession of the institution and barred all the staff and students from exiting the school.

The policemen who blocked all entrances to the school were reported to have told sympathizers who had gathered there that the property had been used as collateral for a bank loan.

Vanguard learned that the AMCON officials led by Barr, Nick Omeye had around 1:40 pm stormed the girls’ boarding school with a team of over 40 armed policemen and left shortly afterward. They later returned around 5.30 pm in a Gestapo style and allegedly sealed up the school gates with students and staff inside.

An eyewitness, who preferred anonymity, told our reporter that he overheard Barr Omeye repeatedly saying while locking up the school, that AMCON had come to claim the property over a loan default.

The informant, who said that he had followed the case for a while added that he had learned that the original owner of the premises, late Ferdinand Anaghara, had donated the property to the proprietor of the school under special arrangement, but that he had an unsettled business with a bank before he died.

But in an interview with Vanguard, the school proprietor, Mrs. Elizabeth Onwuagha, denied knowledge of any pending loan case between late Chief Anaghara and AMCON or any bank whatsoever when she acquired the property in 1997, with just two uncompleted buildings within.

She pointed out that, it was in 2016, 9 years after Chief Anaghara’s death and 20 years after she had acquired the contentious property, that “AMCON showed up with some persons on the ground that they wanted to execute an interlocutory court order empowering it to take possession of our school facilities”.

She said that several interventions were made at the time and the corporation was later prevented from executing the said order.

She further said: “The original owner gave us this facility as a favor. He gave me all the photocopy documents of the property and said he would give us original documents at a later date.

“As at that time, there were two uncompleted buildings and he donated it to us on the condition that we will complete them and use the place specifically for education. Since we took over this place, we have constructed four more buildings and expanded this place which was bushy when we came in.

“When we went for the original documents he, “Chief Anaghara”, told me that he would give it to upon his return from a medical trip abroad. That was in 2007. But unfortunately, he never returned alive.

“We never heard from him or anybody that he was owing to any bank until 2016, 19 years after he had given us the property and nine years after his death that AMCON came.

“They told us that they would not seal the premises because it is a school but that we should find money and clear Ferdinand’s debts.

“I told them that I do not have money and that the school had no money; that schools are social services.

“We later wrote a letter to AMCON stating our side of the issue; the letter was submitted on August 1, 2016, but they never replied to us till today. All of a sudden, AMCON invaded the school with heavily armed policemen when the students were still in class and ordered everyone to vacate; that they had come to take possession of the property”, she lamented.

While raising alarm over the safety of her students, Mrs. Onwuagha alleged that the arms wielding policemen manhandled one of her male staff for asking why they were invading the school with guns.

She also expressed fear over the safety and security of her over 344 female students who were said to be taking their internal exams.

“My greatest fear is the safety of my students who are currently traumatized. Many of them have never seen a gun, and now you have over 40 heavily armed security men storming this premises as if they want a repeat of what happened in Katsina state recently.

She however appealed to the Enugu state government to intervene and call AMCON to order and as well ensure the safety and security of the students, stressing that the school had produced notable personalities including former Miss Nigeria.

Efforts by Vanguard to reach the AMCON team leader was unsuccessful as security agents denied our reporter access to him.