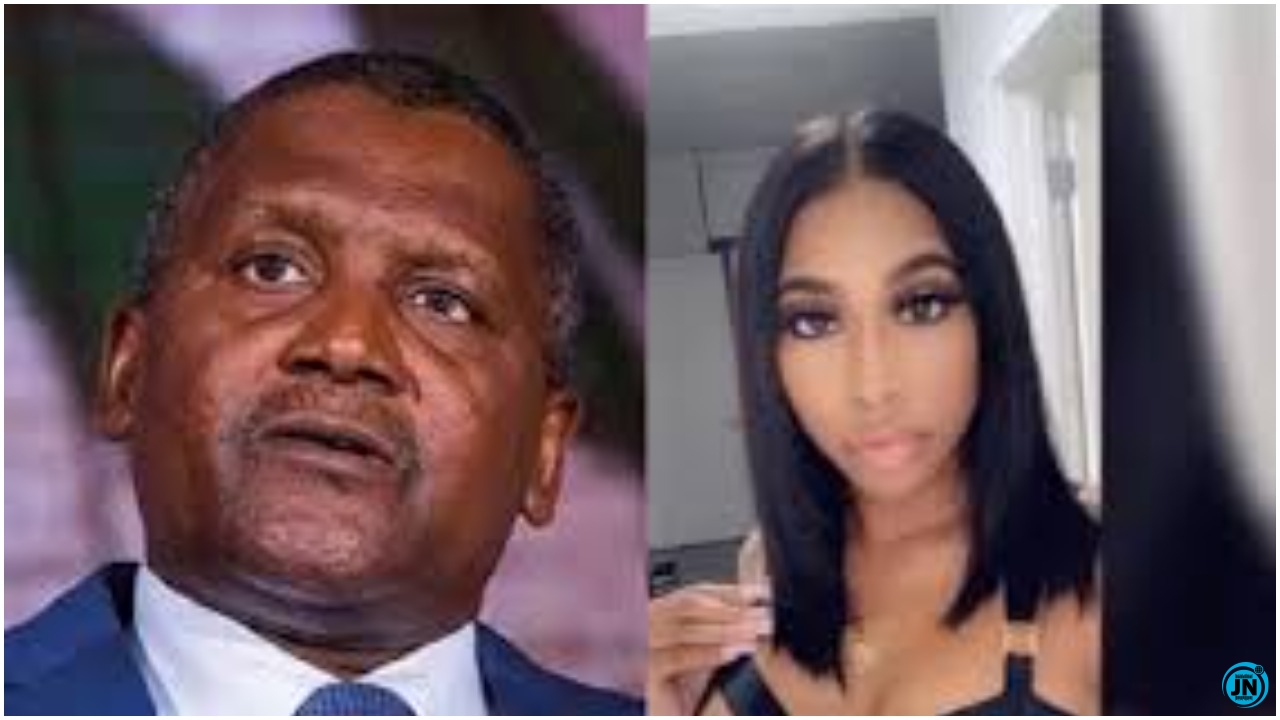 Africa richest man, Alike Dangote, has dragged his former American girlfriend, Autumn Spikes, who exposed a part of his body via a social media post, to court.

According to Premium Times, he is also suing her for trying to extort $5 million from him.

Documents from the civil suit he filed with a pseudonym against the lady at a Miami-Dade County Court in Florida, United States of America, were exclusively obtained by Premium Times.

The wealthy businessman used the pseudonym, John Doe, with AD, which stands for the ‘acronym’ for his name, Aliko Dangote, as his alias.

One of the court documents filed by the plaintiff on January 22, is titled, ‘Complaint petition for declaratory judgment complaint about (about) extortion petition for injunctive relief’.

The document, among others, accused Ms. Spikes of libel, defamation, cyberstalking, and a breach of agreement ”to keep their relationship private and off the social media”.

It stated that Mr. Dangote’s “business acumen has made him a target for coercion by the defendant”, adding that Ms. Spikes demanded “meritless claims of $5 million” in the nature of “palimony to which she is not legally entitled”.

Palimony is an amount of money a law court orders someone to pay regularly to a former partner whom they were living with but were not married to.

“Autumn Spikes has made a demand that the plaintiff pays her five million dollars ($5,000,000.00) as shown in Exhibit 1,” Mr. Dangote’s court document states.

The affair between Mr. Dangote and Ms. Spikes first came to public knowledge on January 1, when the lady using the Instagram handle, Allarounda1, posted a video clip showing herself seated and Mr. Dangote stretched on a couch.

The images, which went viral on social media, appeared to have been captured during their good times together.

It showed most of Mr. Dangote’s body covered in an orange blanket but with his buttocks exposed while he fiddled with his phone.

Ms. Spikes also shared other images of the billionaire but later deleted them.

In later updates, she said she did not make her affairs public on social media to acquire fame.

She also claimed her action was aimed at helping Mr. Dangote ”clear his name of the embarrassment caused by another ex-mistress of the businessman, Bea Lewis, who exposed their intimate affairs on social media”.

Mr. Dangote had tried to quickly end his relationship with Ms. Spikes.

In addition to ending the relationship, he asked Ms. Spikes for a Non-Disclosure Agreement (NDA) about their affair.

Ms. Spikes demanded $5 million, through her representatives, in exchange for the NDA.

The demand was followed by an email by Mr. Dangote’s lawyer, Mr. Fleisher, to Ms. Spikes’ lawyer, Paul Petruzzi, on January 13, asking for “the basis of Ms. Spikes’ demand”.

Responding to Mr. Fleisher’s email, Mr. Petruzzi described the affair between his client and the billionaire as “an ongoing intimate relationship for nearly the entire past decade since she was pretty young”.

Mr. Petruzzi added in the email that ” the relationship was quite involved and pretty interesting” and insisted that Mr. Dangote must pay his client the sum of $5 million in exchange for the NDA.

He stated, “For whatever reason, your client broke off the relationship as soon as one of his other ‘conquests’ broke her silence.

“Your client now wants my client to sign an NDA and, through his representatives, offered her money to do so.

“While I appreciate your client’s desire to continue to exercise his control over mine, she will only agree to the NDA proposed by your client in exchange for the lump sum of 5 million dollars.”

Mr. Dangote filed the email exchange as Exhibit 1 in his suit.

The wealthy man noted in his suit that Ms. Spikes had in the past requested financial assistance from him to start up a business.

He said he agreed to grant her the assistance on the condition that it would remain confidential.

His court document read in part, “Autumn Spikes demanded from the plaintiff assistance as an entrepreneur in a start-up business when there was no loan commitment, nor oral or written promise.

“The plaintiff once announced an oral willingness to provide entrepreneurial assistance to Autumn Spikes on the condition that it be confidential and private.”

He said he later started seeing social media posts and planned media talk shows “done to expose him and make his life miserable if he fails to comply with the demand for $5,000,000.”

“John Doe’s generosity toward Autumn Spikes, if any, has been breached by Autumn Spikes’ exposure and solicitations to talk show media if he fails to pay her meritless demands,” he added.

Mr. Dangote said his “generosity toward Autumn Spikes if any has been breached by Autumn Spikes’ exposure and solicitations to media talk shows if he fails to pay her meritless demands.”

He maintained that ”he had the right to stop being generous to her and demand a refund of the funds he had given her to assist her business in the past”.

The businessman, who described Ms. Spikes’ alleged demands as “meritless extortive demands” said such “is not protected by First Amendment freedom of speech and are barred by Fla. Stat. 771 01 et. Seq”.

He alleged that Ms. Spikes continued her “illegal demands” and threatened that should he fail to pay her the money ”she would subject him to nasty and untrue publicity”.

He stated, “Autumn Spikes continues illegal demands for a plaintiff to pay her what he does not owe her, under threat he will be a victim of nasty and/or untrue publicity in order to induce payment of support, in the form of alimony, and as if she was married to the plaintiff.

“John Doe has a right to terminate his generosity and to obtain from Autumn Spikes a refund of the monies he had given her to assist her in starting up a business.”

Dangote’s complaints, prayersMeanwhile, Mr. Dangote said the alleged demand by Ms. Spike “is embarrassing and upsetting” adding that she “demands support in lieu of marriage or alienation of affection when she is not entitled to the same”.

He also accused her of “cyberstalking” and making demands for money “in exchange for release of private information if he does not pay the proverbial ransom described above”.

Among his prayers are ”a non-jury trial, damages, an award of refund of all of those monies she claims plaintiff paid her, court costs and such remedies as available under the law”.

The plaintiff insists that Ms. Spikes had proposed to expose her relationship with him if he failed to compensate her with $5 million, ”support her” or marry her.

He added that her “media posting violates the plaintiff’s agreement with the defendant that their relationship was private and not subject of social media or talk shows”.

He wants the defendant restrained from demanding “payment in exchange for non-disclosure of their relationship”.

Mr. Dangote’s lawyers described him in the court document as “a wealthy entrepreneur” whose “business acumen” has made “a target for coercion by the defendant.”

The lawyers said their client used pseudonyms to institute the case ”to avoid unnecessary media attention and avert coercion to pay the money demanded by Ms Spikes”.

“The plaintiff, John Doe, also known as AD, is a foreigner and for the purpose of this action employs the pseudonym John Doe in order to avoid unnecessary publicity designed to impair his right to privacy and to coerce his payment of money he does not owe Autumn Spikes,” the document read in part.