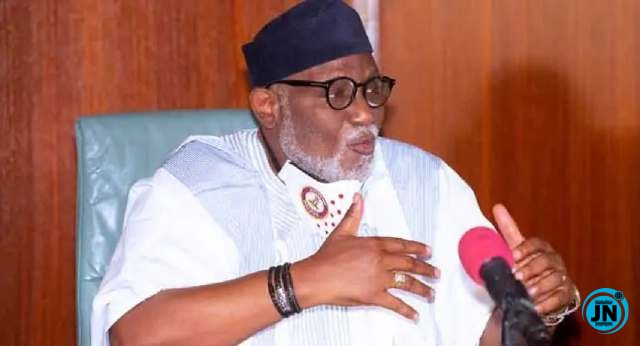 The Peoples Democratic Party in Ondo state and the ruling All Progressive Congress have disagreed on a Social Welfare Financial Assistance Scheme initiated by the governor Rotimi Akeredolu led administration in the state.

While the PDP alleged that the scheme was designed to loot the state treasury, the ruling party said that the opposition party is frustrated and can’t think straight.

Publicity Secretary of the opposition, Kennedy Peretti in a statement alleged that “the fear of the unknown is driving governor Rotimi Akeredolu to do very unthinkable things.

“To underscore the fraudulent intention of the scheme, it is kept as a top-secret.

“The same Government that is unable to pay workers salary, pensions, and deductions, suddenly wants to dole out money to create a pool of money in the event of his being thrown out of Government.

” ln the last couple of days, the Governor has acted in ways, suggestive of the fact that he knows that, his stay in the Government House is but for a while.

” The ceremony for this scheme was not made public for strategic reasons and the venue has been changed a number of time to give vent to its sinister motive.

“We wish to advise Governor Akeredolu to address the challenges of security and welfare that stare our people in the faces instead of devising ways to defraud the people.

But the APC through its Publicity Secretary, Alex Kalejaye in his response said that ” a group of persons under the guise of an opposition party struggling to find its bearing, nothing is spared in the name of comments.

“We feel their pains and their palpable frustration as it gets clear by the day that they have gone deeper in the mess that entangled them.

Kalejaye said that ” for such uninformed comments from the PDP, the best is to express empathy with them, especially when they have lost their bearing in the face of a looming leadership crisis. No political party without unity and cohesion can think straight.