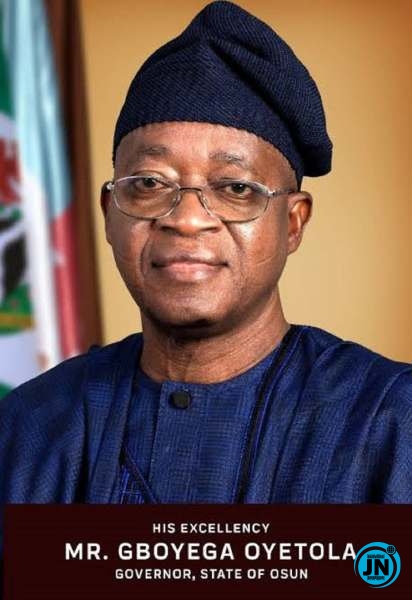 As part of efforts to address bottlenecks in critical water supply services to households in the State, the State Government of Osun has finalized arrangements for the commencement of a 250 million liters capacity water project.

At the signing of a Memorandum of Understanding between the State Government of Osun and Efficacy Construction Company, today in Osogbo, the Commissioner for Water Resources and Energy, Dr. Amidu Tadese Raheem, said the project which commences with immediate effect, sets the tone for the fulfillment of yet another electoral promise of Governor Adegboyega Oyetola.

According to him: “We are aware that water is essential to human life, and it became even more required during the outbreak of the COVID-19 pandemic.

“So, the essence of our gathering today is to sign the formal agreement between the State of Osun and Efficacy Construction Company for the immediate pursuance of this important agenda”, Amidu said.

In his address, the Managing Director of Efficacy Construction Company, Dr Oyeleke Ajiboye, appreciated Governor Oyetola for the foresight, describing the project as the beginning of great things to happen in the State.

Describing the scope of the project, Ajiboye said: “Our focus for this project is to develop 250 million litres of water, with production and delivery to 2.5 million residents across the State.

“We will also be developing 256 modular water treatment system across the State, shared among villages and communities so that there is no need to transport water across long distances. Also, the systems will require less energy, less power and fewer types of machinery to make the water work”, Ajiboye explained.

In his remark, the Special Adviser to the Governor on Water Resources, Engr. Felix Ibitoye Adeniran, commended the Governor of the State of Osun on the project, describing it as a milestone as far as the water supply is concerned in the State.

He added that the project will also open up other opportunities like job creation for citizens during the period of the construction.