Barrack Obama Slams Donald Trump Over The Violence That Erupted At Capitol Building, Accuses Him Of Inciting His Supporters
Posted by

Former President of America, Barrack Obama has slammed President Donald Trump over the violence that erupted at Capitol Building when Trump supporters invaded the building in a bid to stop the certification of Joe Biden’s win in the November election.

Obama has accused Trump of inciting his supporters to perform such a magnitude of violence with his ‘baseless lie’ about the outcome of the election. Reports have it that four people have been confirmed dead as a result of the violence on Wednesday, January 6.

Taking to his Twitter page on Thursday morning, Obama shared a picture of his statement regarding the violence which shocked Americans and the world at large.

“History will rightly remember today’s violence at the Capitol, incited by a sitting president who has continued to baselessly lie about the outcome of a lawful election, as a moment of great dishonor and shame for our nation. But we’d be kidding ourselves if we treated it as a total surprise.

“For two months now, a political party and its accompanying media ecosystem have too often been unwilling to tell their followers the truth – that this was not a particularly close election and that President-elect Biden will be inaugurated on Jan. 20. Their fantasy narrative has spiraled further and further from reality, and it builds upon years of sown resentments. Now we’re seeing the consequences, whipped up into a violent crescendo.

“Right now, Republican leaders have a choice made clear in the desecrated chambers of democracy. They can continue down this road and keep stoking the rage fires, or they can choose reality and take the first steps toward extinguishing the flames. They can choose America.

“I’ve been heartened to see so many members of the president’s party speak up forcefully today. Their voices add to the examples of Republican state and local officials in states like Georgia who’ve refused to be intimidated and have discharged their duties honorably. We need more leaders like these – right now and in the days, weeks, and months ahead as President-elect Biden works to restore a common purpose to our politics. It’s up to all of us as Americans, regardless of party, to support him in that goal.” 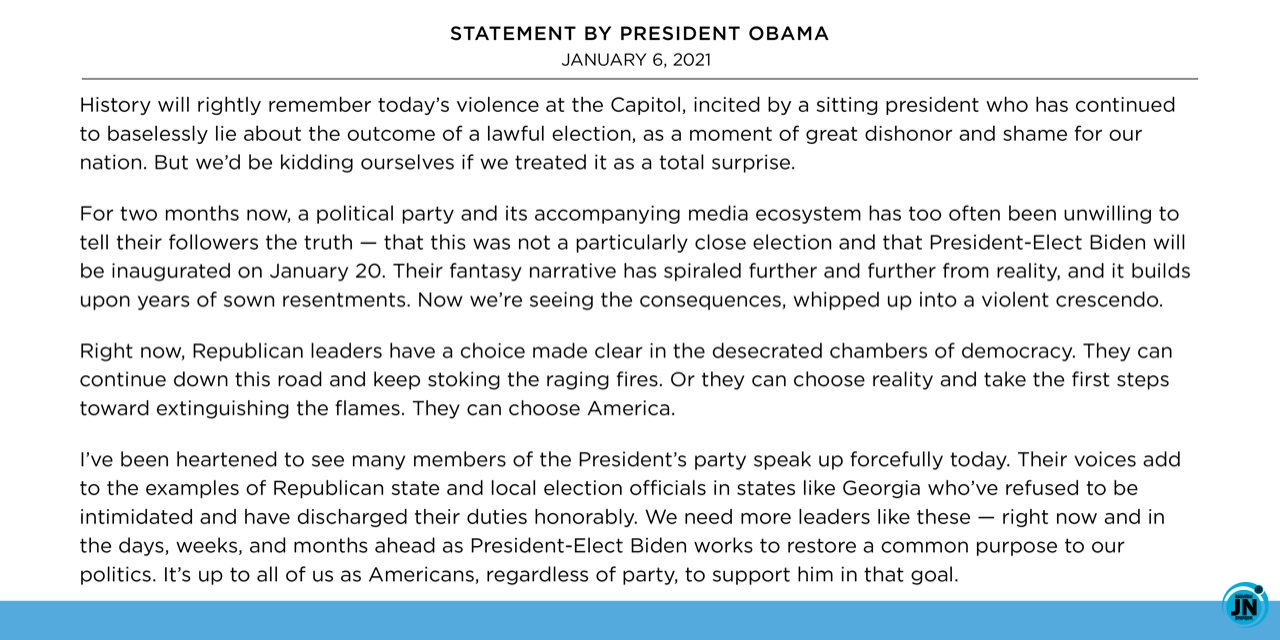 Barrack Obama Slams Donald Trump Over The Violence That Erupted At Capitol Building, Accuses Him Of Inciting His Supporters