‘You are such an inspiration’ – Actress, Mercy Aigbe showers accolades on Funke Akindele - JustNaija

‘You are such an inspiration’ – Actress, Mercy Aigbe showers accolades on Funke Akindele
Posted by 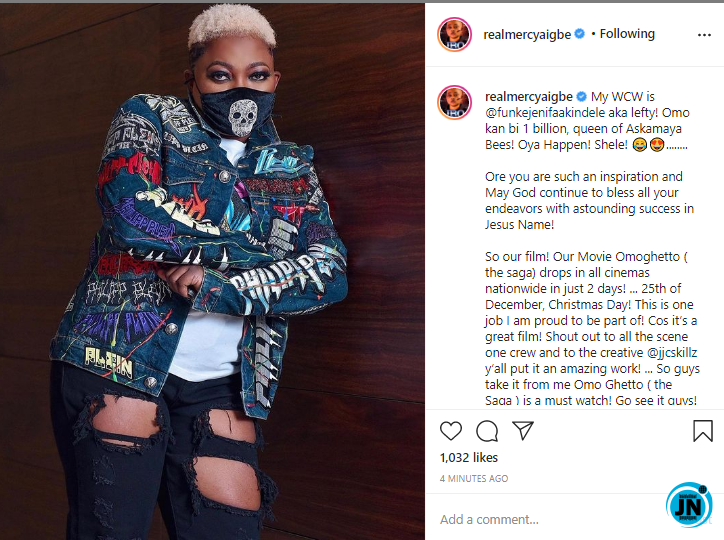 According to Mercy, Funke is an Inspiration to her and she is her woman crush. She also prayed to God to bless the mother of two and her success on her latest project.

Sharing a recent photo of Funke, the mother of two wrote;

“My WCW is @funkejenifaakindele aka lefty! Omo kan bi 1 billion, queen of Askamaya Bees! Oya Happen! Shele!…….. Ore you are such an inspiration and May God continue to bless all your endeavors with astounding success in Jesus Name!

So our film! Our Movie Omoghetto ( the saga) drops in all cinemas nationwide in just 2 days! … 25th of December, Christmas Day! This is one job I am proud to be part of! Cos it’s a great film! Shout out to all the scene one crew and to the creative @jjcskillz y’all put it an amazing work! … So guys take it from me Omo Ghetto ( the Saga ) is a must watch! Go see it guys! You will over love it!

Recall that few days ago, Funke Akindele’s much anticipated movie, Omo Ghetto (The Saga) was successfully premiered ahead of its Christmas Day release to cinemas.

The premiere was indeed star studded as top Nigerian celebrities stepped out in their ‘Rugged attires’ to grace the occasion.

The movie Omo Ghetto (The Saga) is a sequel from Omo Ghetto which was released few years ago, directed by Abiodun Olarenwaju and produced by Funke Akindele-Bello.

An unfortunate incident sheds more light to their birth, paternity and troubling behaviour.