Wizkid, the Nigerian superstar musician, is getting ready to release the deluxe version of his Made in Lagos (MIL) album, and he's teased his fans with a sneak peek. 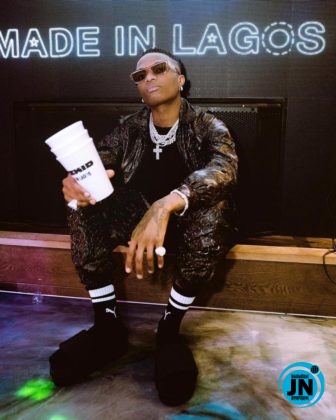 Wizkid accompanied the sample for the MIL Deluxe version with a video from what appeared to be a music video set. On Wednesday, August 25th, he uploaded the excerpt on his Instagram stories.


Wizkid will be dropping the new version of his record-breaking album on Friday and already fans are eager to hear what he has in store. The singer shared the tracklist yesterday and we already know that rave of the moment, Buju is featured on one of the songs. Wizkid wrote on the video, "Hardest fucking nigga in da world! ❤️🖤🦅. Deluxe Friday!! 😇"

From the setting of the video snippet Wizkid shared and his recent posts, we can assume he's shooting a new video off the MIL deluxe album. It will be interesting to have another song gain ground as much as Essence has done in recent times.

WATCH THE VIDEO BELOW:


Drop your comments
WIZKID MADE IN LAGOS DELUXE

Man Reveals What Wizkid Said To Him After He Saw Him Wearing A Davido 30BG Shirt
Wizkid Fans Happy As He Shows More Glimpse Of His House (Photos)
As Burna Boy's "Kilometre" Tops UK Afrobeats Chart, See Others Positions Of Wizkid, Davido & Others
Tiwa Savage Shares Cute Photo Of Wizkid Placing A Kiss On Her Forehead