Wizkid Confirms He Is A Twin To American Rapper, Swae Lee (Photo)
Posted by

Popular Nigerian music artist, Wizkid has for long been rubbing shoulders with global and widely known music superstars and now their relationship is glaring. 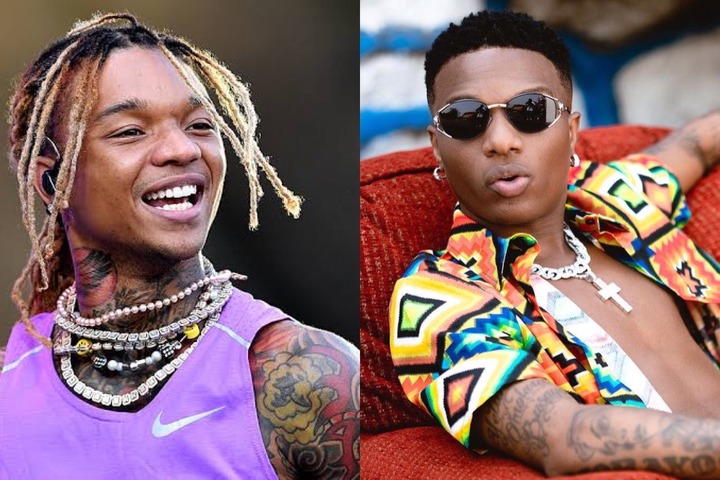 Yesterday, American rapper, Swae Lee whose real names are Khalif Malik Ibn Shaman Brown and he is one half of the hip hop duo Rae Sremmurd with his brother Slim Jxmmi took to Twitter to throw a shout out at Wizkid.

It happened this way..

A fan had asked him that he needed more collaborations between the two artists and he gave a sweet reply.

He then replied; “My twin @wizkidayo”

Wizkid however, took to the social network this morning to give a response to his tweet as he simply replied; “Twin! 🖤🦅”

Swae Lee who is a 5-time Grammy Awards nominee has previously worked with Wizkid on a song titled, “Borrowed Love” which both artist were featured on by Metro Boomin. The song did numbers.

They also recorded the original version of French Montana’s hit song, ‘Unforgettable,’ which featured only Swae Lee but the original one featured Wizkid.

Actress Regina Daniels Finally Reveals The Secret To Her Tiny Waist After Child Delivery (Photos)
Stitches Net Worth 2020: Bio, Age, and Spouse
Singer Davido peppers a lady who abused him in a club in the U.S (Video)
Toyin Abraham Gives Details About Her New Movie, ‘Fate Of Alakada’ (Here Is All You Need To Know)