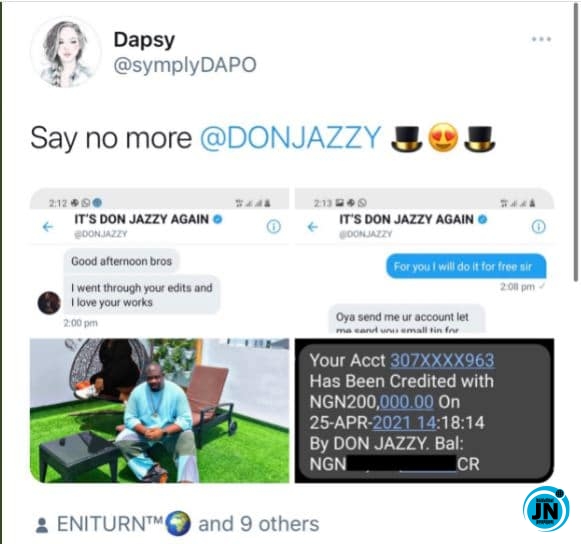 Nigerian record producer Don Jazzy is currently trending on the microblogging platform Twitter over a ridiculous amount of money paid to have Barbadian singer Rihanna photoshopped in his picture.

According to the chat which surfaced on social media, the Mavin record boss had stumbled on a job of the photo editor; pleased with his edits, he asked the Twitter user to do a job for him.

The Twitter user offered to work for Don Jazzy for free, and he photoshopped Rihanna to a picture of Don Jazzy. He was later offered the sum of two hundred thousand Naira for the job by Don Jazzy.

However, the photogenerated hilarious reactions on Twitter as netizens mocked the Mavin record boss that even in the photoshop picture, he is still unable to get close to Rihanna.

@zion_trybe wrote: Don jazzy pay people ridiculous sums esp on this app for doing next to nothing…. ooh God, I tap into his anointing, just bless me that way!!!

@chef_yinda wrote: Don Jazzy is one of the best people we have around, there is no day I don’t see a post on his Instagram supporting one small business owner or skit maker and the likes…God replenish and keep him

@Mc_Phils wrote: Even in photoshopped Don Jazzy still didn’t get to touch Rihanna

“I have never seen chest this huge” – Toke Makinwa gushes over Dorathy as they link up (Video)
“Davido is fighting to get his ex back over Chioma”
‘This Life No Balance’ - Nigerians Are Surprised By The Prize BBNaija Season 5 Winner Will Win
“I carry this body unapologetically” – Actress, Eniola Badmus brags