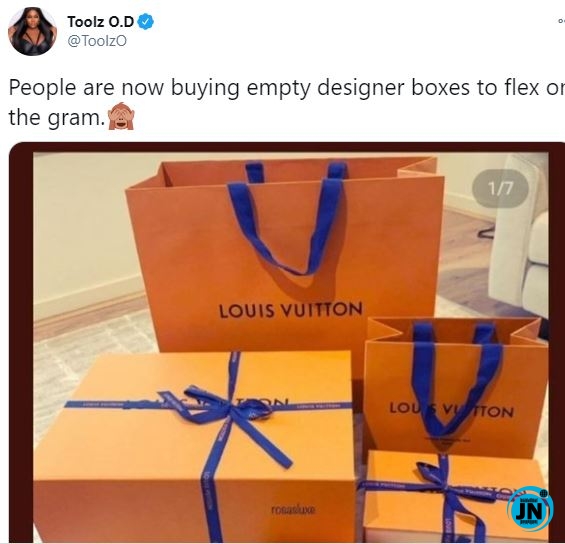 According to the mother of two, who via her Twitter handle shared a photo of an IG page selling fake designer boxes with the caption;

Sharing the photo, she wrote;

”People are now buying empty designer boxes to flex on the gram.”

See how some social media users reacted to her tweet below;

@Indabosky Icon wrote; ”This is why I don’t go to Instagram, I only go there only when I know it’s been long I have a headache. I can’t be questioning my God all the time.”

@Cynthia Agbobu wrote;” oh yes it’s thriving market weather to fake flex on the gram or to try to legitimize knockoff goods they sell on the posh mark.”

@Zeus wrote; ”Why are you covering the handle, I’m sure there are people that would like to buy.”

@Derrickz wrote; ”What exactly is stopping the angel in charge of blowing the trumpet Trumpet from doing so. Come on! We have seen a lot already.”