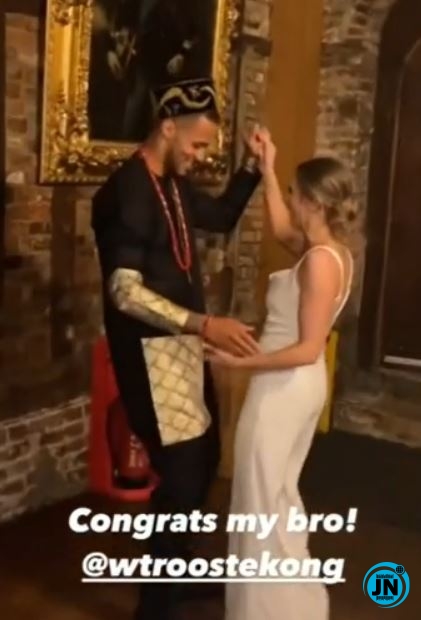 Nigerian footballer, William Troost-Ekong has tied the knot with his longtime girlfriend in a private ceremony

The lovers who welcomed their first child together, Oscar, in 2014, finally got married in a private ceremony that took place in London on Sunday night, October 17th.

The wedding had several footballers including Kelechi Iheanacho, Wilfred Ndidi, Leon Balogun, Moussa Sissoko, and many other superstars in attendance.

Friends, colleagues and well-wishers have trooped to social media to congratulate the couple.

Watch video from their private wedding below,


Williams Troost-Ekong was born in Netherlands, he represent Nigeria on international level. He played at Youth level for fulham and Totteham Hotspur

He made his debut for Nigeria in 2015 and has since earned more than 40 caps. He attended secondary school at Hockerill Anglo-European College in Bishop’s Stortford, near London.

He made his senior international debut for the Super Eagles on 13 June 2015, playing 90 minutes in an AFCON qualifying match against Chad.

‘Mommy Why Na’ - Iyabo Ojo’s Daughter Replies Her Mom After She Called Her This
Magician Shocks Davido And His Entire DMW Crew, As He Entertains Them With Magic (VIDEO)
See The Car Toyin Abraham Bought For Her Son, Ire On His First Birthday (Photos)
Twitter influencer, Pamilerin calls out his Aunt’s husband for allegedly killing her