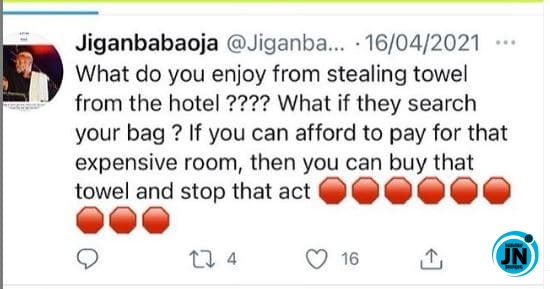 Yoruba Nollywood actor Jigan Babaoja has taken to social media to berates those who steal a towel from a hotel room when existing.

A few weeks ago, this issue made a trend on social media where people listed some of the items they have stolen from the hotel while checking out.

In a post shared on the microblogging platform Twitter, the actor questioned what people who engage in such activity tends to gain.

According to Jigan, who frowned at the act, if an individual can afford an expensive room, then what is the essence is stealing an item in a hotel room.

He tweeted: What do you enjoy from stealing towel from the hotel??? What if they search your bag? If you can afford to pay for that expensive room, then you can buy that towel and stop that act.

Erica speaks following reports that Kiddwaya and Linek allegedly planned to play her dirty
Steve Thompson confirms reports that he has ended relationship with wife, barely 5 months after marriage
Check Out The Price In Naira Of The New Diamond Wristwatch That Davido Just Bought For Himself
Tonto Dikeh cautions fan who insinuated that her son is more handsome than Rosy’s son