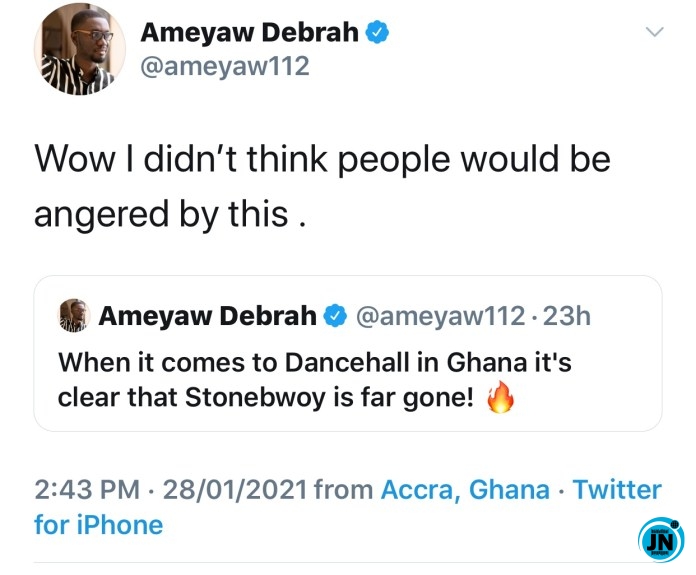 Blogger, Ameyaw Debrah says he never thought anyone would be angered by his comments about Stonebwoy being in a different rank when it comes to Dancehall in Ghana.

With Shatta Wale and Stonebwoy being the face of Dancehall in the country, There is a long-existing debate on who exactly is the king among the two, forcing The former to titled one of his tunes’Dancehall King’, in an attempt to secure the Kingship tag and he almost achieved that with his large fanbase behind him.

Having a lesser fanbase than Shatta, Stonebwoy on the other hand does not do too much talking about the Kingship tag but mostly proved that on various awards stages. his consecutive Dancehall artist of the year wins speak for themselves.

Thus according to Ameyaw Debrah, no one stands a chance when it comes to the genre in the country. “when it comes to Dancehall, in Ghana, it’s clear that Stonebwoy is far gone. He tweeted

His comment doesn’t sound well to the hearing of SM fans who criticize his choice heavily. Some even believe the blogger knows nothing about Music “This guy actually dumps in music” one SM fan wrote. And when it comes to Blogging in Ghana, it’s clear that @ameyaw112 u are far far far behind the rest 😂😂 sooormi 🖕another SM fan added.

Ameyaw is a new tweet seems to be left in shock how his own opinion would anger someone.