Simi, a Nigerian musician, has offered some social media advise to aspiring artists, emphasizing the significance of creating content on a daily basis. 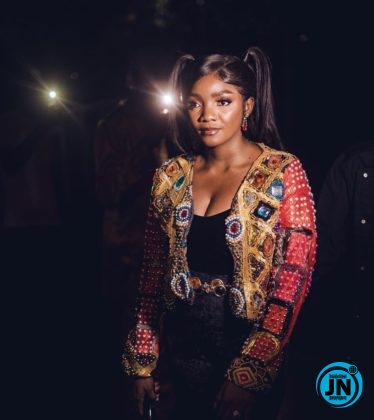 In her advise to upcoming artists, Simi stressed the importance of using social media and posting music-related content on a daily basis. On Friday, December 7th, 2021, she posted this on her Instagram feed.

Simi, who returned to the music arena after a brief sabbatical following the birth of her first child with Adekunle Gold, performed a headline show in Lagos last month. She returned shortly after the sabbatical with a song titled Happy Birthday for her daughter, co-written with her husband, before releasing her own single, Woman.

Simi emphasized the importance of visibility on social media in her advise to younger musicians, cautioning against the temptation to act mysteriously online. According to her,


You a "serious" growing artist have only 3 posts on your page. A picture of the sunset, one of aeroplane and one of your shoe. Caption - Lost, but don't find me. Nothing with your music in it. That's not a great look. If you wan't it bad bad, always be selling yourself. Leave the mysterious shit for when you've won! Even then, still leave it. 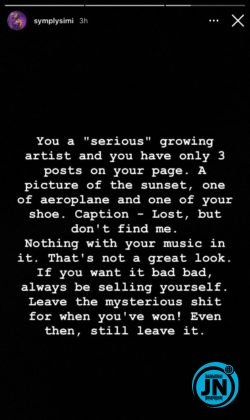