Bose Ogulu, the mom of Burna Boy, a successful and Grammy nominated Nigerian Afrobeat artist, praised Wizkid for treating her with such a gift. 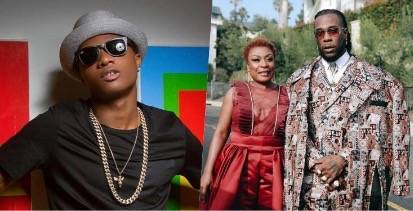 As sometimes referred to, Adedeji Balogun, best known as Wizkid, sent a bunch of flowers to Mama Burna in honor of the mom of the African Giant.

Know that Wizkid and Burna Boy, the two musicians, were originally not on a pleasant note but Little by little, though, it seems to be patching up as they have both linked up in London creating musics.

As the pair have recently been seen linking up together on many occasions, it seems their current relationship is going to another level every day.

The mother of Burna Boy took to Instagram to thank the singer for the beautiful flowers, with a caption,

However, the new bond between Wizkid and Burna Boy is ready to produce a new music as it is revealed that Burna Boy would be featured on Wizkid’s soon to be released album, ‘Made In Lagos.’

It good to be frendly.

U didn't write anything it was blank.