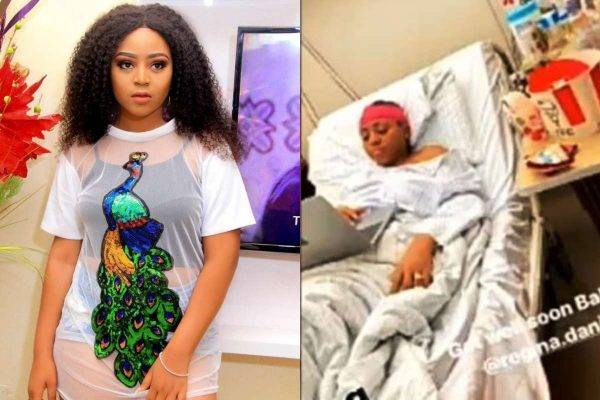 Popular actress from Nollywood and former child star, Regina Daniels, was hospitalized on New Year's Eve after she fell sick.

Still in Germany, the actress was so happy to receive two of her mates in her private hospital ward as she seems likely to spend the first day of the year in the hospital.

Regina Daniels has fallen ill, according to Tunezmediablog, and will have to remain on her sickbed during the New Year's festivities.

A video currently online shows Ned Nwoko's wife of a billionaire businessman chilling in her ward, dressed in a gown in the hospital and a pink head band.

Last month, the actress caused a stir on Instagram when fans spotted what looks like a baby bump on her.

Regina Daniels and her husband Ned Nwoko were spotted together in a video during a "Malaria Eradication Program" initiative sponsored by her husband's foundation. In the video, Regina's protruding stomach raised eye brows about a potential baby bump.

A fan who wrote, noticed, ‘you are finally pregnant,’ whilst others send in their congratulatory messages.