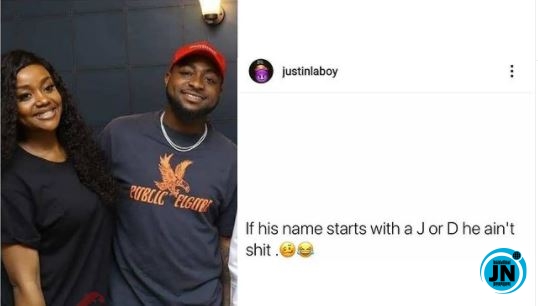 The photo of the fiancee to Nigerian music star, Davido, Chioma Rowland liked has become a growing sensation on social media since it was shared.

In the photo, an Instagram page made a stereotypical statement about boys whose name start with the J or D. In the post, Justinlaboy shared a post with the statement;

Apparently, Chioma Rowland liked the post insinuating her baby daddy and herself are likely having some relational issues.

Chioma had also deleted some photos of her and Davido together ( the proposal pictures when she was pregnant, birthday wishes posts of Davido, etc), and the few ones she left, she edited and took off the caption.

This, however, has fueled the lingering break up a rumor that has been flying around.


Kemi Filani News recalls that the multiple awards winning singer took to his social media page to announce that his album would drop on Friday, November 13. The announcement came with an adorable photo of his son Ifeanyi as he was spotted on the cover of the album.

The little boy’s photo has however trailed so many reactions among social media and many have decided to share their thoughts.

I mean you big star , should stop playing with our girls..if you want to marry her or leave her for another person to marry