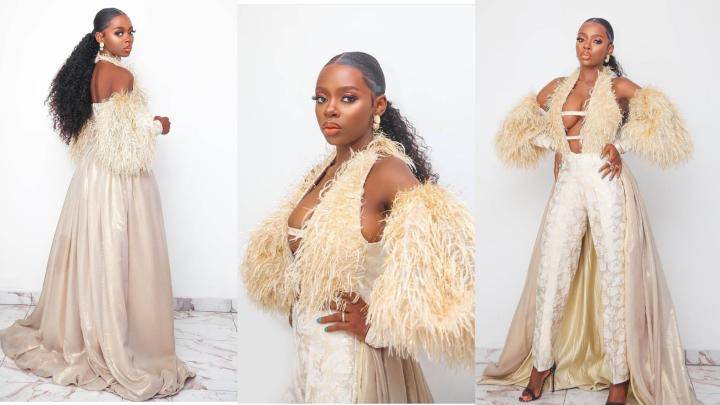 Big Brother Naija ‘Pepper Dem’ star, Diane is currently shaking the Nigerian media space with her outfit to the premiere of the film, The Legend Of Inikpi.

Diane's appearance yesterday night to the even is causing a stir and it actually the talk of the town right now.

The Nigerian Twitter users can't stop talking too as the reality TV star is currently on a top spot in the trends table.

The film directed by Frank Rajah tells a convincing tale of two kingdoms on the brink of war.

The historical drama is set in the ancient Kingdom of Igal and Bini.

Regina Daniels shared exclusive picture of her son, Nigerians reacts
Nigerians React As FG Set To Pay Unemployed Youths N20k Monthly To Clear Drainages, Sweep Markets
Naira Marley Reacts After Been Slammed By Nigerians, For Holding A Concert
‘Who Cares?’ - Nigerians React To Photos Of Davido In Crutches After Injuring His Ankle (Photos)

DJ Cuppy hits the streets of London riding with Stonebwoy, in her new Ferrari (Video)

Rema Excited As He Hits 100 Million Streams On Audiomack

"Laycon did not unfollow Erica on IG, she blocked him" – Man says

Yahrosy Comedy - Don't Point At Me

The Flowolf – On A Jay ft. Mayorkun & Dremo