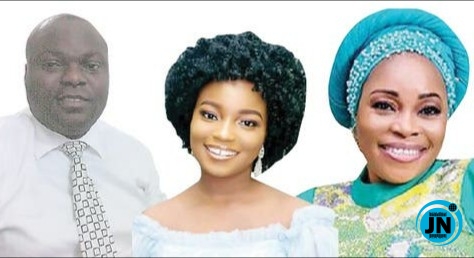 Victor Oyegoke, brother to Olalekan Oyegoke, aka Mayegun Olaoye, the father of gospel singer, Tope Alabi’s first child, Ayomikun has revealed more shocking details about the relationship between his brother and Alabi.

Recall that the gospel singer, was hit with a big scandal last weekend, after one Mayegun Olaoye had claimed to be Ayomikun’s father, while alleging that Tope Alabi had blocked every avenue for him to know his biological daughter in the past 22 years.

Responding, Ayomikun in a chat with PUNCH, denounced the Mayegun Olaoye, and clearly stated that the only father she knows is her mother’s husband, Soji Alabi.

Victor Oyegoke, brother of Mayegun, has now shed more light on the scandal in this chat with PUNCH, see excerpts:

What do you know about the relationship that existed between Mayegun Olaoye and Tope Alabi?

"I know everything that happened because I was staying with my brother (Mayegun Olaoye) at the time. It was in Akure (Ondo State capital) that he met Tope Alabi (whose surname was Obayomi then).

My brother does not want us to talk to anybody and this is something he has been trying to avoid but I just have to clear the air. We would have spoken about this issue a long time ago but my brother did not want it to seem like he was damaging her career.

Since the news broke, a lot of people have been dragging our family’s name in the mud. Stories that my brother maltreated her are false. He is the first born of our family while I’m the fifth child. Our father died at an early age in 1983 and my brother was the one who sponsored his younger ones in school.

He has been taking care of his family for a long time, so how can someone like that be described as irresponsible? My brother supported her career so much. I am sure the child, Ayomiku, spoke the way she did because of what she had been told.

We learnt that Ayomiku’s surname had been changed from Oyegoke to Alabi. Then, my brother called her (Tope). He said he wanted to see the child and discuss some issues. So, together with some movie marketers, they organised a meeting in 2018 at The Arena shopping complex in Oshodi, Lagos".

What transpired at the meeting?

"The meeting was attended by marketers like Wastayo (Wasiu Afolayan) and Millenium (Adekunle Owoade). At the meeting, Tope claimed that she did not tell Ayomiku negative things about her father. She said the girl was of age and could make her own decisions.

She admitted that my brother did not offend her but she was the one that wronged him. She also said Soji often told Ayomiku about her biological father.

Tope was also asked why she changed the child’s surname to Alabi and she said it was because whenever they had to travel, she would have to provide a letter of consent from the child’s father. So, she said she changed her surname to make things easier.

Even if a man wants to adopt a child, there is a legal process that ought to be followed, particularly when the child’s father is alive.

Before she left on that day, she was asked to give my brother a phone number that he could reach Ayomiku on and she did.

However, when my brother called her (Ayomiku), they did not get along well".

Do you know how Tope and your brother met?

"My brother was dating a lady called Bimpe and she was the one he initially wanted to marry. Tope and my brother met through the late actor, Alade Aromire. She was a member of Alade’s ‘Ori Ire’ caucus in the Yoruba movie industry.

My brother used to be close to Alade, and he had a shop at Idumota (Lagos). He always supported the movie industry. He met Tope at a movie location in Akure. He introduced Tope to me and some of our siblings but I didn’t think it was anything really serious.

However, I was surprised when I later visited him in Lagos and met Tope in his house. I asked him about Bunmi who he had already been making marriage plans with but he waved my comments aside. He told us Tope was pregnant for him.

Meanwhile, my mum who was a midwife examined Tope and said she was not pregnant.

My mum said she had prayed about it and it was revealed to her that he should not marry a light-skinned woman (like Tope). But my brother got annoyed with her for saying that and told her not to come to his house again. At a stage, Tope was not happy with our mother.

Later, she said she had a miscarriage. After some time, she got pregnant again and eventually had Ayomikun".

What led to their split?

"Barely a year after Tope gave birth to Ayomikun, she moved out of my brother’s house with Ayomikun."

Did they have a fight?

"There was nothing like that. My brother begged her profusely but she refused to budge. Prior to that, there was a day I visited my brother’s house and knocked the door for a long time before I was attended to.

I later saw Soji Alabi, who was a sound engineer and producer, and Tope. They said they were busy recording in the studio. I had also been hearing some rumours that there was an affair between Tope and Soji, so I told my brother. But, my brother was very angry when I told him that and he actually beat me.

He was deeply in love with Tope. When she left, she took the master tape of her album that my brother sponsored. As a matter of fact, it took him some time to recover from the experience.

It was not more than a year after she left my brother that she got married to Soji. It was after their wedding that my brother married Bunmi, the lady he was dating before Tope came into the picture.

However, she (Bunmi) died in the course of giving birth to their second child. After some time, my brother remarried and he is doing well.

Before then, my brother had organised an elaborate christening for Ayomikun that was well attended by many of the major movie marketers of that time".

When Tope eventually moved out, what moves did your brother make to reach out to her for the sake of their child?

"He reached out to her severally. After Tope left his house, she took the child to her mother’s place. My brother often sent me and another brother of ours to check on the child.

He even used to call Tope. Our mother also regularly called Tope’s mother. Also, Tope used to go to my brother’s office at Idumota to collect money for Ayomiku’s upkeep.

Tope should deny these claims if I am lying.

After Tope released the successful album, ‘Ore ti o Common’, she took Ayomiku from her mother’s house. It was then my brother had to pull back. You would not expect him to be going to the house of his married ex to see the child. He could have been ridiculed".

What does your brother want now?

"He just wants to establish the fact that Ayomikun has a biological father who is alive. He has other male and female children, so it is not as if he is desperate to have a child.

My brother is a very gentle person and he has refused to talk about this. However, the issue has gone beyond him and our family’s name is being dragged in the mud. That is why I am speaking out".

“Who Am I To Have Made It This Far?” – BBNaija’s Laycon Reacts As He Makes It To Finals
Mayegun Olaoye’s younger brother, makes shocking revelation about Tope Alabi and first husband
BBNaija’s Dorathy Bachor makes the front page of Uncutxtra Magazine
Man United Player, Pogba Makes Use Of Nigerian Artist, Mayorkun Song, ‘Geng’ In New Video (Watch)