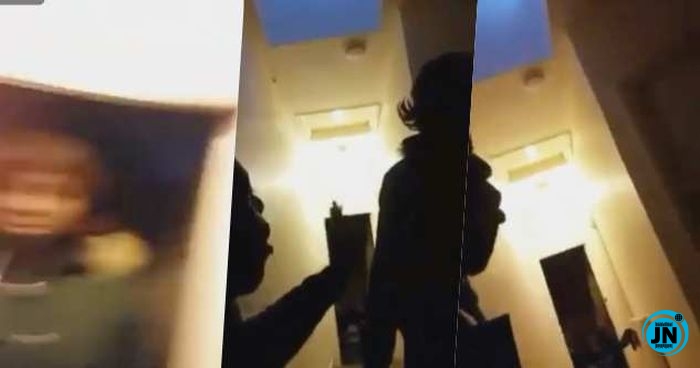 In a video posted online, the husband is seen moving his belongings while telling his wife that it’s over between them because her mother denied him access to their kids just because she said he didn’t come into her house to greet her.

His wife tried to calm him down but he refused. He asked his wife how many times she has called his own mother that hers should penalize him for not greeting her.

His wife told him they could settle it as friends but he refused.

He added that he’s done with the marriage no matter what. He further informed the wife that she has called the cops on him before and taken him to court and he asked if friends do that to each other.

He went on to tell his wife that they can still be in each other’s lives since they have 3 kids together but they don’t necessarily have to live together.

He then mentioned to her that he plans to do a DNA test on one of their kids because he recalls her telling a nurse to his face that the child isn’t his.

Gospel artiste, Sammie Okposo and wife celebrate 11th wedding anniversary with stunning photos
Beautiful Arab lady set to give Nengi a run for her money as she claims she’s Ozo’s wife-to-be
Nigerians go crazy after Obi Cubana did this to his wife
Adjogbe commiserates with Ndoma-Egba over wife’s demise