on Apr 15, 2020 5
Classification goes alongside the existence of living things, and as such comparison is natural with humans as Nigerian singer Brymo claims to be better than Nigerian singers Wizkid, Burna Boy and Davido.

But one thing is sure which I keep on saying, Form is temporary while class is permanent. At the end of it all, I expect you to tell us who has the Class to always deliver.

Although, we rightly understand they all portray different genres of music and talents.

Following the release of Brymo’s latest album “Yellow” which has gotten credit from a large number of good music lovers, the 33-year-old singer has made the claim of been better off than Wizkid, Burna Boy and Davido.

The claim sparked out an exchange of some words with Nigerian social media users who took on the singer for some of his spirited statements on Twiter.

In one of his tweets, Brymo responded with “Who are those?” after a twitter user stated that none of the singer’s music in the last 5 years would make as much wave as Burna Boy’s “African Giant” album, Wizkid’s “SoundmanEp” and Davido’s singles “Blow My Mind” and “Risky”. 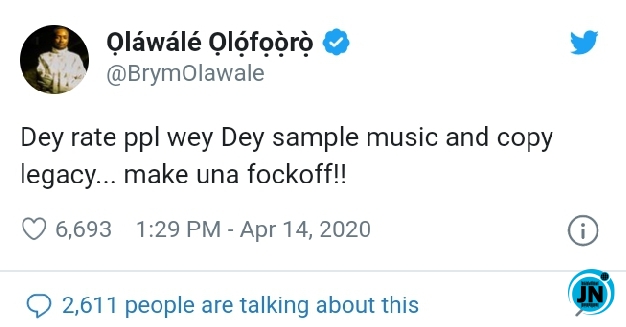 The Yellow singer also stated that the reason he is not decorated is that he refused to play and in some instances pay – if Nigerians are to judge by the awards or accolades achieved by other artists.

“I’m their daddy though !…. and if you are judging all these by awards, local or foreign, I’ll have you know that I refused to play, or even pay cash in some instances is why I’m not decorated. so you people should shut it!!..”

He backed up the claim with another tweet saying: “Those who don’t play in a certain league don’t get decorated there… one concert a year in Lagos and you are the artists of the year. crap!!”

The twitter drama began after Brymo reacted to a Twitter user who stated that the singer’s recently released album “Yellow” is good but it is not great and wouldn’t make even the singer’s top 3 albums.

“Brymo makes lovely music. He is one of the best out there in this country, but Yellow won’t even crack his own Top 3. Good album, not great.”

“F**king liar… !! Yellow is my best work so far. out-streamed all of my catalog in two weeks…”

Another user wasted no time and called out Brymo for boasting that “Yellow” out-streamed all his previous works as he had previously tweeted that “Number Do Lie” and stated that other artistes in the industry were insincere about the numbers of their stream.

“Lol The Way Artistes swear it’s not by ‘Numbers’ till they Legit start doing Huge Numbers then they start using it as a Yardstick as well is just. See Brymo o.. dey use ‘Numbers’ judge ‘Best’ work”

Brymo responded that he only judged himself by his previous successes. The singer sum-up by saying; “silly” how people rate artistes based on awards, collaboration, and streams on platforms that aren’t African:

“It’s silly how you all rate streams by platforms that aren’t present in Africa, rate acts by collaborations and awards that are not African…. affiliating with people who banned you from entering their country…” Since the industry is full of talent and a floozy lifestyle, a show of strength is welcome and gives room for improvement.

I can’t be the judge to this, rather I leave this case between Brymo vs Wizkid, Davido, or Burna Boy for you.

Is Brymo better than any of the three?

Music Producer Kel P Shares WhatsApp Chat With Wizkid, See Why He Was Begging Him (Photo)
Boluwatife praises his dad, Wizkid, as they spend father and son moments together (Photos)
Man drags Wizkid, Burna Boy for flaunting gold teeth, says he had his since 15 (Video)
I Don't Know Them – Singer Brymo rubbishes Wizkid, Burnaboy and Davido

Brymo genres has not been absorbed yet in the Nigerian space

Rightly said, Can we say Brymo is wrong for going into such a heated section on Social media? failing to understand his genre differs from theirs.

Sure, meaning we can say Brymo is wrong for going into such a heated section on Social media?

they are not even singing the same music,so why arguing
he sings alternative rocks,yoruba based songs,,, wizkid and davido are mainly based on afropop😪