Priscilla Ojo, Iyabo Ojo’s daughter have swiftly saved her friend from the hands of internet trolls beneath her post.

The whole moment initial started as a joke but before it turned to another thing entirely Priscilla Ojo had to step in to state that she is her friend and shouldn’t be attacked.

Priscilla Ojo posted new photos on her Instagram page and in the caption she mentioned that some people are hungry for likes on their posts and she later went on to instruct her followers to like the post if they agreed.

“Some people are so hungry for likes smh.. like if you agree.”

The captioned initially was a joke because after stating that people are hungry for likes you later went on to tell them to like the post if they agreed so that is sensed as a mere joke.

But a comment came on that reads, “you think you’re funny smh”

The actually sounded like an internet troll meanwhile it was just her friend playing with Priscilla Ojo through the comment.

Actually playing along, Priscilla Ojo decided to follow the baby’s thrown at her from her friend, she replied “Who are you please”

Then an internet troll ready to pounce simply replied Priscilla, “babe you have time to answer people sha just leave them abeg”

Swiftly trying to make everything clear, Priscilla quickly commented that she is her friend.

She replied, “she’s my friend, don’t mind her.” 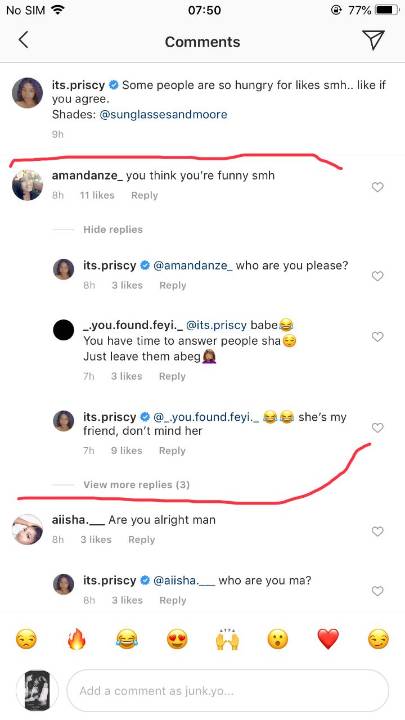 Iyabo Ojo’s Daughter Saves Her Friend From Internet Trolls (See Screenshots)
“I’m Going Delete Your Account” – Singer, Simi Blows Hot, Threatens Her Mother After She Confessed What She Did At Eko Hotel (Screenshots)