Actress and mum of one, Ronke Odusanya has now addressed the viral reports of wrecking her baby daddy’s finances.

Posting on her Instagram page hours ago, Ronke wrote “While my silence may be taken for cowardice, I will be calm because the truth always reveals itself. I can defend myself but I won’t want my daughter to grow up reading such irritating and fact-less information. The court of social media has always been myopic and manipulative. Remember you did not make me, you cannot break me. Bank statements can reveal who has been receiving money from who and for what? Investigate before publishing…”

After making the post, actress Jaye Kuti and Opeyemi Ayeola were the only ones that showed her support, the likes of Mercy Aigbe, Toyin Abraham, Iyabo Ojo, and others simply shunned the post.

Actress Jaiye Kuti wrote “It is well darling. It is well. Just be calm”

Actress Opeyemi Aiyeola wrote “” I wish upon u today divine wisdom, strength, and grace to sail through this season” 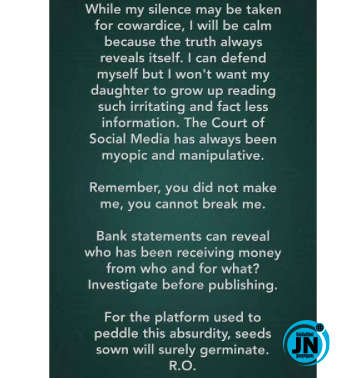 Kemi Filani News recalls that Ronke Odusanya was recently accused of wrecking the financial life of her baby daddy, Jago.

The viral report claimed that the actress, Ronke Odusanya is fighting for sole custody of her daughter with the help of Barrister Festus Keyamo.

The report further claimed that Ronke Odunsaya is demanding restraining order to avoid her estranged lover from coming anywhere near her and the Baby after making him sell off 3 out of his 4cars to foot her bills.

“She wants to level up to Mercy Aigbe, Iyabo Ojo and co because she said they all have a studio now where They keep all their equipment and they don’t need to rent whenever they want to shoot, they can also rent out the equipment to others who don’t have, she requested 65m for her to set up the said studio” her baby daddy, Jago allegedly claimed.

“My dad never said NO” – Blogger, Ronke reveals how her father spoiled her by always letting her have her way
Nollywood actress, Ronke Odusanya showers encomium on her baby daddy
Iyabo Ojo, Mercy Aigbe shun Ronke Odusanya as she battles baby daddy