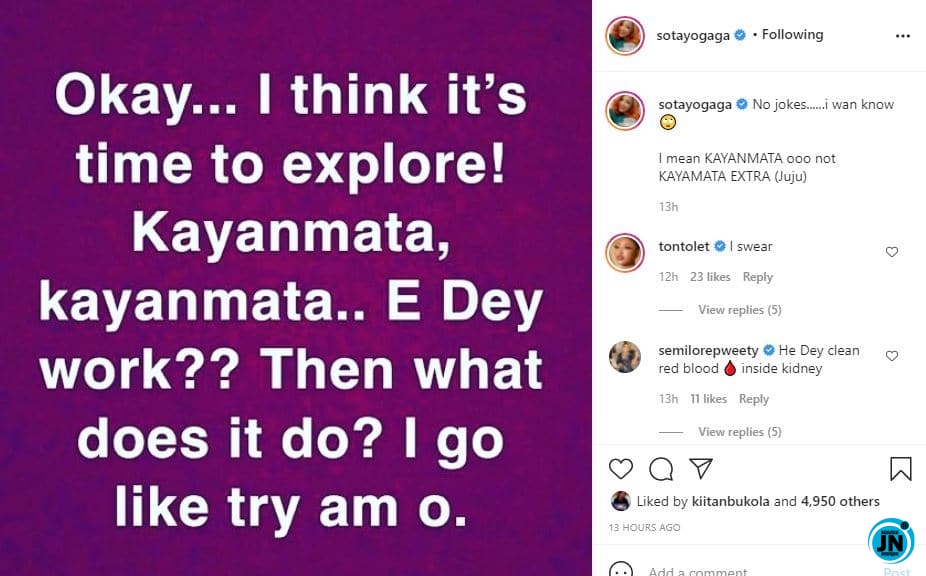 Nollywood actress Tayo Sobola popularly called Sotayogaga has revealed plans to explore the latest herb trend and scheme most ladies use to collect money from men.

In a post shared on her Instagram page, the actress said it is time to explore Kayanmata products as she questions if it works.

Sotayogaga, who wants men to spend lavishly, said she would love to give a trail to Kayanmata products to enable men to shower her with lots of goodies and cash.

She wrote: Okay… I think it’s time to explore! Kayanmata, Kayanmata… E dey work?? Then what does it do? I go like try am o.

KemiFilani News recalls that Sotayogaga recently read the riot act to his colleagues and friends who feels uncomfortable with her attitude.

Taking to her Snapchat, the actress said the level of how she gets irritated at recent times has tripled, urging people to ignore her if she doesn’t find them worthy of interacting with.

Tayo Sobola said she’s aware her head is messed up, but she cannot put up with fake people anymore and act in pretense, adding she sees things differently and is more focused on herself and her immediate family.

According to the actress, being herself does not mean she is proud or a snub, but if people find her social media post irritated, they should mute her. She often does that to people who she feels irritated by their behavior.

Tayo Sobola added that not calling or checking up on people does not mean she hates them or doesn’t have them in mind.

Prophet Jeremiah Omoto Fufeyin gifts his longtime pastor friend who dreamt of how his ministry will grow massively, a car, one million naira plus monthly stipends
“I’m seeing double” – Maureen Esisi laments as she cleans house by herself for the first time after nanny left her without notice
3 neighbors marry, get pregnant, deliver at same time
Funke Akindele Bello Opens Up About Her Babies For The First Time