“I Don’t Get Why It Bothers People That My Sons Live With Their Dad!” Kiddwaya’s Mum Fires At Critics- See Screenshot.
Posted by

Susan Waya, the mother of BBNaija Star, Terseer Waya a.k.a Kiddwaya has taken a swipe at those who are shaming her son for living at their father’s house.

Mrs.Waya has said that she doesn’t understand why it bothers people so much that her sons  Kidd and Tersoo Terry Waya still live under their father, Terry Waya.

This is coming after a Twitter user blasted Kidd on Wednesday saying that he was still under his father, however, Kidd had revealed that he owns a house in Maitama, Abuja, and one in London.

Taking to her Instagram page, Mrs. Waya revealed that her boys love spending quality time with their dad.

“I don’t get it why it bothers a lot of people that my boys love with their daf in their own home, go on holidays with him and enjoy every opportunity given to spend quality time together. So when is the right time to move out of their home? Or is their dad complaining?? Haha!!” 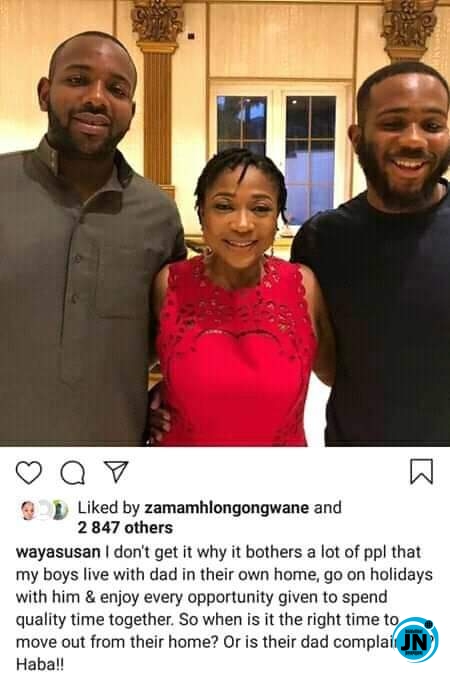 Burna Boy Fires An Indirect Shot At Wizkid In His New Post
Andrew Mccabe is an ignorant Fool – Trump Fires Attorney.
‘Stop Harassing My Life’ – Juliet Ibrahim Fires At Ex-Boyfriend Iceberg Slim
Teebillz fires back after being dragged for naming Tacha ‘most bankable without opening legs’