A Nigerian man, Kosi Ugo, who is also a blogger, has taken to social media and alleged that Nollywood actor, Williams Uchemba, who recently got married is gay.

Recall that Williams and his bride, Brunella Oscar, recently got married in a luxurious Church and traditional wedding ceremonies which took place last week and two weeks ago respectively.

Kosi Ugo took to his Facebook page on Tuesday and alleged that Williams is homosexual and he does not understand “why a man who is strictly into men would pick one innocent woman and marry”.

He also added that anyone who does not know that Williams is gay “is late to the party”. 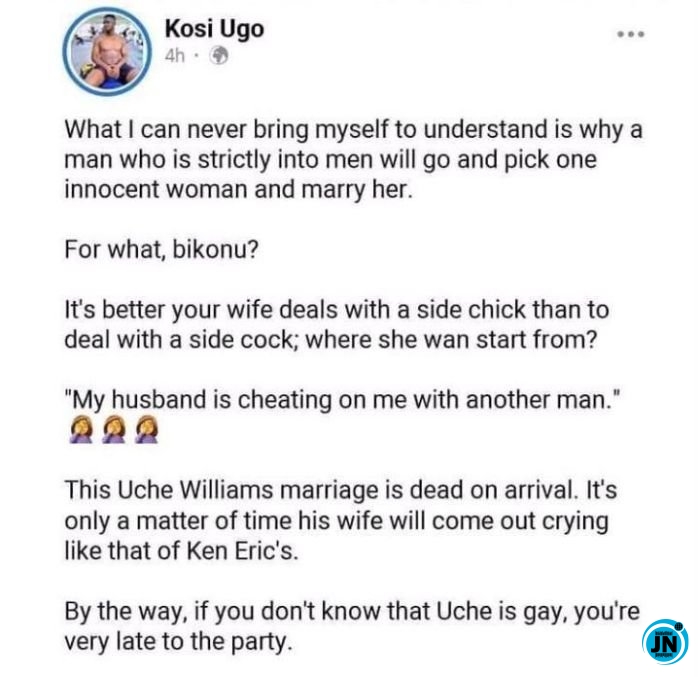 Meanwhile, reactions have trailed the allegation, while some noded in affirmation wondering why they have never seen Williams with a lady before, others insisted he is just a private person who wished to keep his relationship away from social media until due time.

“He Is Gay And His Wife Will Soon Come Out Crying” – Man Makes Damaging Accusation Against Williams Uchemba
As Churchill introduces Rosy Meurer as his wife, old video where she denied Tonto Dikeh’s accusation of sleeping with Churchill surfaces