Hailey Land: Photos From Birthday Party Of Davido's Daughter In Atlanta
Posted by

On the occasion of their daughter Hailey's fourth birthday, Nigerian singer Davido and his second baby mama, Amanda, had members of the internet gushing with sweet posts dedicated to her.

Join our Telegram Channel for Updates
However, the celebration did not end on social media, as the celebrant was also treated to a lovely party to make her day even more memorable. 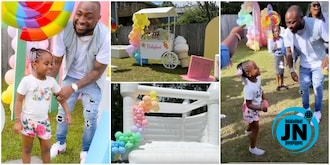 The doting parents employed the help of an event planner to bring to life a beautiful Hailey-Land themed party.

A large open area was customized in line with the theme of Hailey’s party and there was enough food and drinks to go around for the little ones and adults who showed up for the celebrant.

Davido who has been in Atlanta over the past couple of days also showed up alongside some other members of his 30 BG crew.

Check out pictures and videos as seen on social media below: 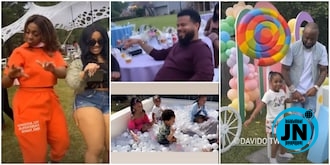 Paul Okoye celebrates son, Chukwunonso as he marks 8th birthday
All Smiles As Kcee Shares New Family Pictures To Celebrate His Birthday
“From glory to glory” – Etinosa says as she celebrate her first birthday as a mum
BBNaija’s Frodd Breaks Down In Tears After Witnessing Laycon’s 27th Birthday Celebration