Frank Lampard Sack: How Soon To Be Manager, Thomas Tuchel Could Set Up His Chelsea Team (Photo)
Posted by

Chelsea in the early hours of today have announced that they alre parted ways with club legend, Frank Lampard as their manager. 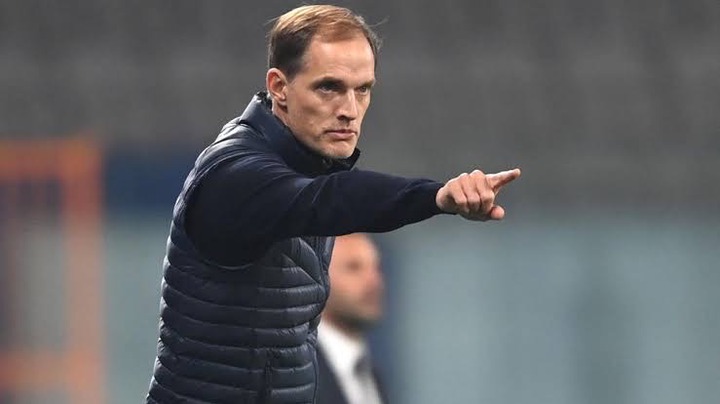 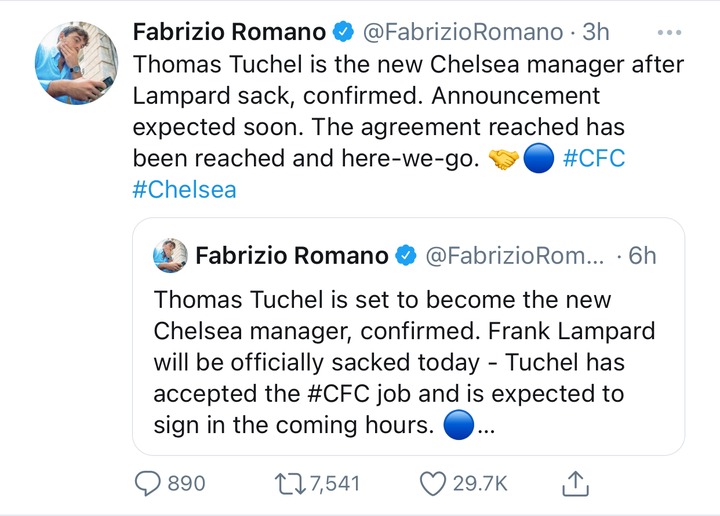 However, while the announcement is imminent, I take a look at how he can transform Chelsea to his days at Borussia Dortmund and PSG.

Specifically, this thread will look over:

• Getting the best out of the squad

The first thing to note about Tuchel and his Dortmund side is that they were very pragmatic. He would adapt not only his personnel but also his formation to his opponent. However, most often he would lineup in a slightly asymmetric 433/4231 as seen below. 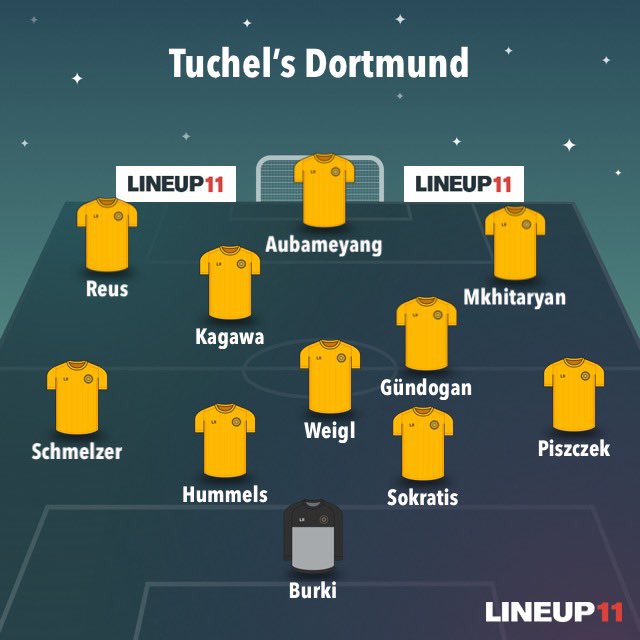 Despite this, his key principles always remained, he was an attacking manager, with an emphasis on pressing.

In his first season, Dortmund scored the most goals in the league, and in his two-years as their manager, he amassed a higher win rate than any manager in their history.

In the press, Dortmund were ruthlessly effective. As a manager who looked to dominant games (averaged 63% possession in 15/16), his press was key to success. Whilst he gained what was already a good pressing side from Klopp, he did improve them.

Specifically, he improved their counter-press (Pressing just after you lose the ball).

In his last season, Klopp’s side were really struggling with this, and the way Tuchel solved this was with improving their structure in possession.

Players were now much more tied down to their roles, so when the ball was lost they could counter-press in a much more organised manner. When they pressed, they were very astute, often looking to overload the zone, blocking passing lanes and restricting the opposition. 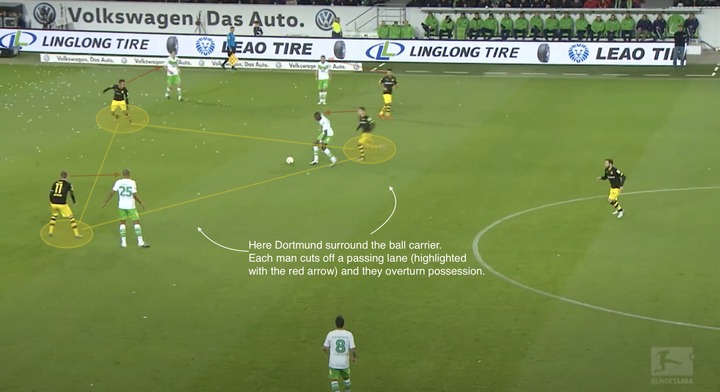 This is one thing he will immediately improve at Chelsea.

Chelsea’s press has been very disjointed under Lampard, the main problem being the defenders don’t step up. This leaves a massive space for the opposition to exploit, and I expect Tuchel to fix this fairly quickly. 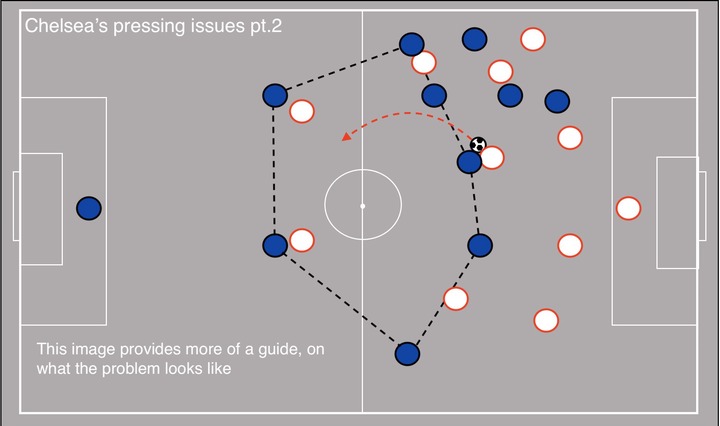 Once they got the ball, Tuchel’s Dortmund were one of the best sides in Europe on the transition. A large part of this was due to the pace of their side, but this also something that Chelsea’s side possess.

What was key to his sides offensive transition was largely the positioning of Aubameyang.

Throughout the game, but specifically in counter attacking situations, Aubameyang would be right on the last line of the defence, something Werner could do perfectly. 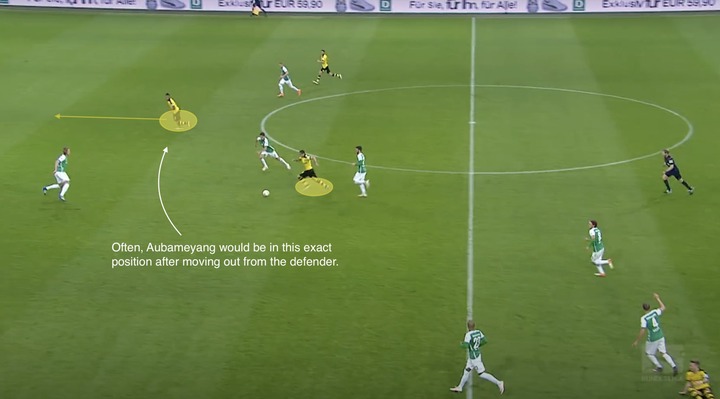 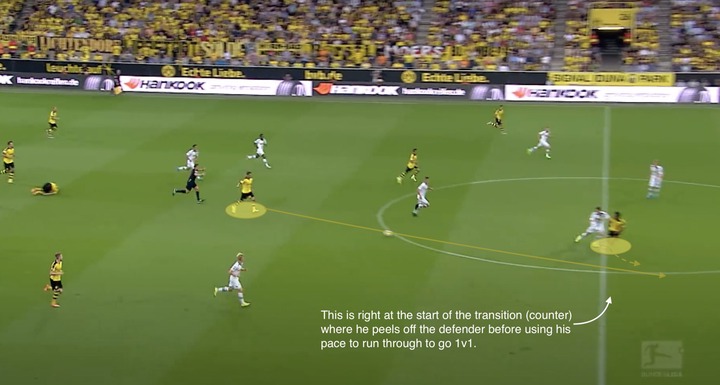 One of the things that stood out most in the counter for Dortmund was their composure. They were extremely well drilled for this situation, using space and movement well to get an easy finish.

As we mentioned when talking about Dortmund’s counter-press, they were very well structured in possession. Their use of positional play was fantastic and they always looked good on the ball.

When building from the back, they started with a base three and two midfielders, with one of the CM’s (usually Weigl) dropping into the backline with the fullbacks pushing on, which was key to their style. 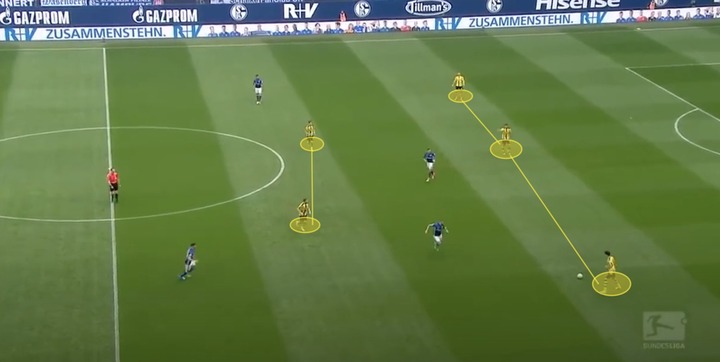 Tuchel’s side were exceptional at using all of the space across the midfield. The wingbacks would occupy the wing space, and they would load the halfspaces. This worked particularly well with their long switches.

Dortmund would overload the side nearest the ball, often with both Kagawa and Mkhitaryan in the halfspace, although oriented on different vertical lines. This helped their interplay, but also drew the opponents over, leaving space for a quick switch out to the opposing fullback.

These switches were also evident in their chance creation, and the fullbacks under Tuchel were key to their style.

As seen below, the fullbacks would always be trying to find space in the final third, and likewise the midfielders would look to play to them.

Once the fullbacks were in these positions, they would look for either an underlapping midfielder, or to drive the ball low across the box for Aubameyang or the farside winger. We’ll talk about this later, but this suits the likes of Werner and Havertz perfectly.

Tuchel’s side were also really good at going direct. When they did so, they always looked to overload one of the opposition defenders, either with a player dropping off, or as seen below with two runs. Once more, this would utilise the pace Chelsea possess. 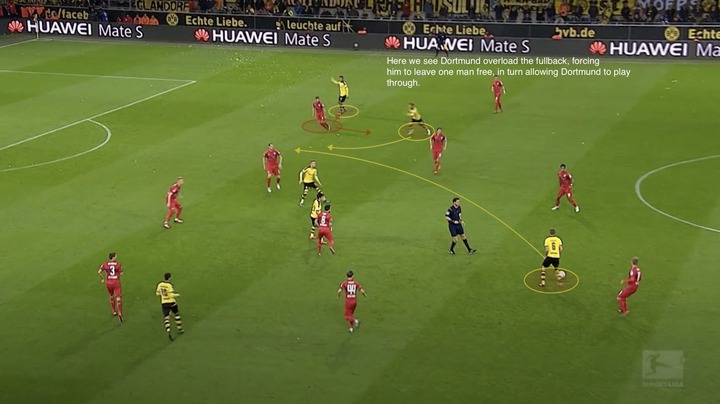 5. Getting the best out of the squad

Now this is probably where and why Lampard got the sack, the poor performances of new signings Werner & Havertz. They’re both great players, but couldn’t get firing under Frank, but I think Tuchel can get the best out of them.

Starting with Werner, we’ve spoken about it already, but the way Aubameyang performed under Tuchel would play to all of his strengths. Acting on the last line, using his pace and movement to get in behind could be what’s needed to get Timo firing again. 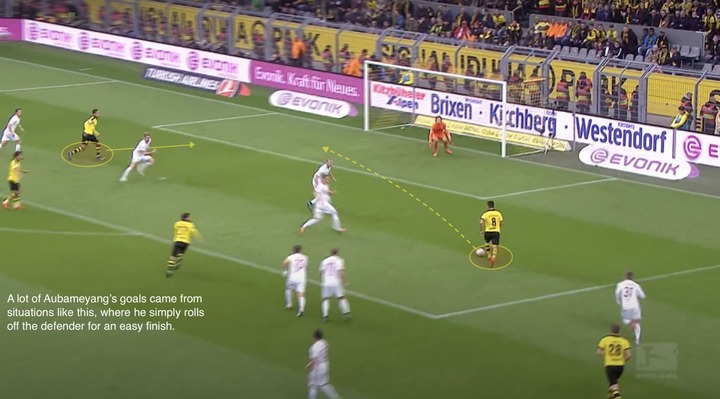 Likewise with Havertz, he’s a fantastic player, but didn’t really suit Lampard’s system. His best attributes are linking play, but more so getting into the box, and this is something we saw Kagawa do and I think this could help Havertz excel under Tuchel.

Lastly, Callum Hudson Odoi was really underutilised by Lampard, but I think there’s a good chance we might see a resurgence of him under Tuchel. Tuchel started as a youth manager, and this carried through in his management of Ousmane Dembele, who’s career he really boosted.

Overall, I expect Tuchel to line up in various different formations, but do believe he’ll stick to some variant of the 433/4231 that worked so well at Dortmund, and expect the lineup to resemble something similar to what’s below. 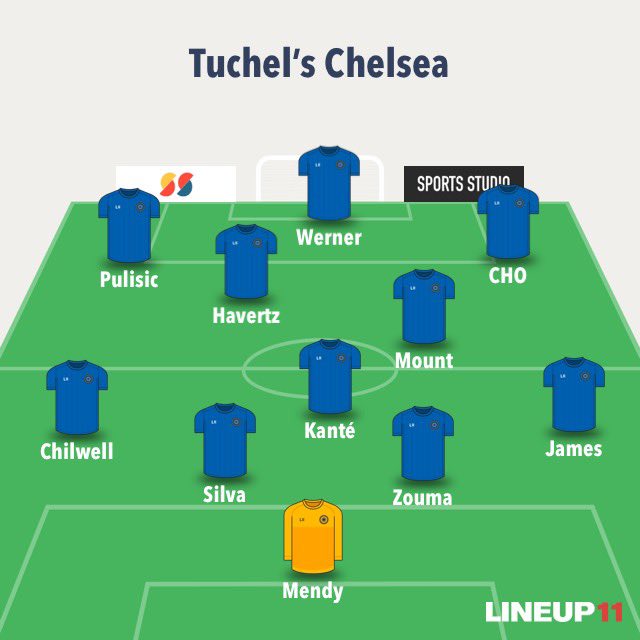 Whilst the sacking of Lampard midway through a season is questionable, I do genuinely believe that Tuchel has the potential to succeed at Chelsea. His style of play at Dortmund could really suit the squad, and the winning mentality he gained at PSG can only benefit this.