on May 03, 2020 3
If there is any rivalry that is likely to continue after here on earth, it would be Davido Vs Wizkid FC as the feud between the DMW boss and Wizkid loyalists aroused into another level.

Times without numbers, both singers have always been seen as par as far as the Nigerian music industry breathes.

No doubt, Davido and Wizkid are top-rated artists who are capable of dishing out something spectacular anytime any day as they have done for over a decade now.

But what do you expect from the fans of both singers who are doing so well? For me, nothing but constant hit from both sets of fans. Just like fans of Messi and Ronaldo on who is the Greatest of All Time (GOAT).

The last time such comparison arise was a pastor asking his congregation who is more responsible between both artists. While this time, it on another level following the DMW boss latest Tweet about his collaboration with Nicki Minaj. 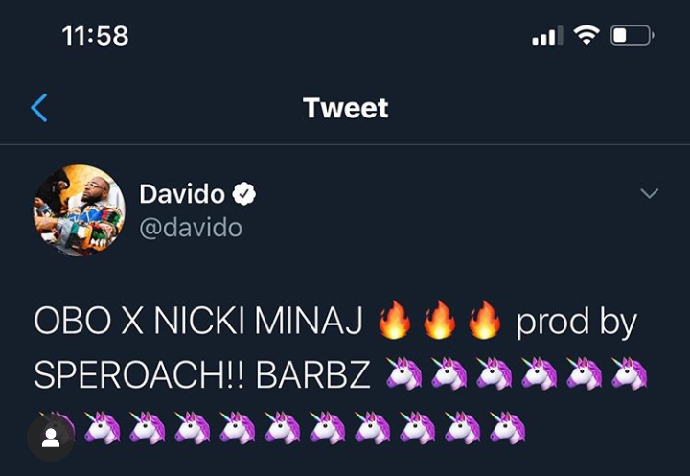 A twitter user, Irunnia who is suspected to be a Wizkid's extremist, responded to Davido's Tweet by saying "If it was Wizkid, Nicki Minaj would be the one tweeting and hyping the song, not the other way around. OBO should calm down abeg. There are levels to this Sh*t.

The 30billion Gang Chieftain, Davido who is known to be vocal and mounted in such matters replied by saying, "Yo I love Wiz but yo WIZKID FC CAN SUCK MY D$CK!! X2!!. 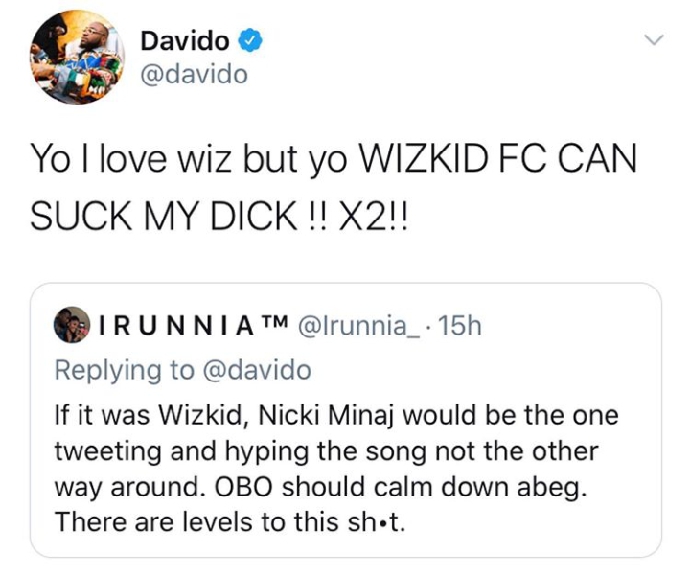 However, one thing is sure which is good energy between Davido and Wizkid. Because each time such surfaces, Wizkid doesn't get involved directly and Davido tries to take on the fan directly.

Meanwhile, we expect more as both singers continue to be relevant. We leave the rest for you to settle between OBO and WIZKID FC.

What is your thought about this?

“What An Achievement” - YouTube Praises Wizkid As 'JORO' Hits 113 Million Views
‘When I See You I See Me’ – Davido To His Second Daughter, Hailey Adeleke
#EndSARS: Use same energy to cast your votes in next election – Actress, Kate Henshaw tells Nigerians
“Don’t introduce your ‘important people’ to just anyone” – Actress Lilian Esoro