Davido Reacts To Tosin Ashafa Saying He Signed Him To His First Official Contract.

Recently, there's a trend on social media which was brought up  by Bev Gooden asking people to share random music facts which they knew about.

Responding to the thread, Tosin Ashafa revealed that he gave popular Nigerian singer and CEO of DMW, no other person than Davido, his first professional contract before his dad realised that David a great passion for music and bought them out.

Here's what Tosin wrote below:

“I signed @davido to his 1st Offical contract under black diamond promotions with Cecil Hammond/another silent partner, we hired @GodwinTom to manage him .Dr Adeleke realized David was really serious with pushing his music without him , reached out to us and bought us out ".

Davido retweeted the post, and responded with: "LMAO facts". 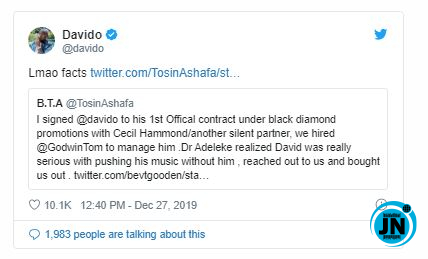