Popular Nigerian cross dresser, Bobrisky has exposed a man on Instagram after he sent him some direct message on the popular social network. The controversial social media personality actually called out the man because after he messaged him with good remarks he later went on to say a vulgar word at him.

In the screenshot he shared, the man had initially sent a direct message saying ‘Hey s*xy’ but Bobrisky didn’t reply.

Definitely infuriated with what Bob did he messaged again the next day with ‘fool’.

This didn’t go down well with Bobrisky as he shared a screenshot and dragged the user on his page.

He shared the screenshot with the caption:

”On Wednesday I was s*xy, suddenly I became a fool on Thursday 😂😂😂😂😂😂. Coronavirus is disturbing this one brain.” 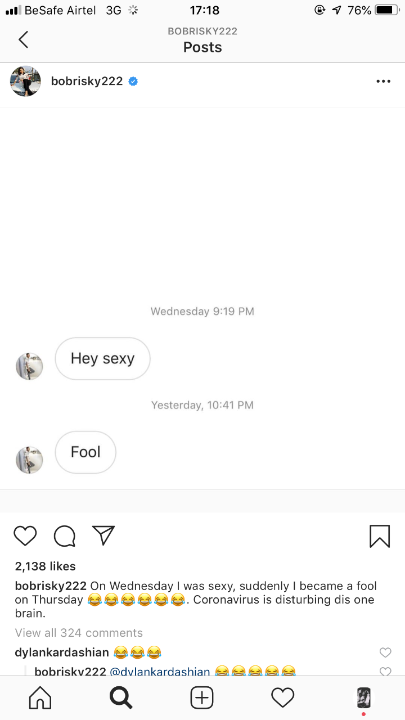 The post has since gone on to be deleted by Bobrisky.

Meanwhile, off recent the popular Nigerian cross dresser said he is set to and ready to change back to his normal ways after he was told that Jesus is coming soon.

He has made it known through his Instagram page that he is ready to get rid of his nails, eyelashes and wigs after he was told that Jesus will soon be back.

Bobrisky took to popular photo and video sharing platform to disclose this.