Could Burna Boy be Related To Fela Kuti? | JustNaija 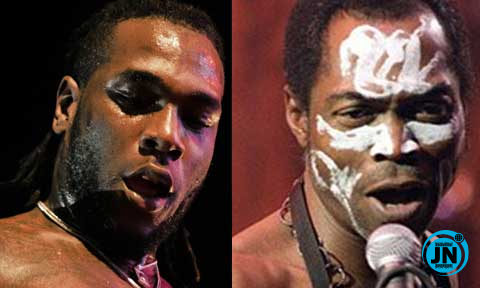 When you listen to songs like Ye, Gbona, Dangote and recent hit song Anybody; all songs from the rave of the moment also known as the African Giant: Burna Boy, one may ask if Burna is related to Afrobeat Pioneer Fela Kuti.

Before we get to the main discussion, let's talk about Fela Kuti.

Who Is Fela Kuti 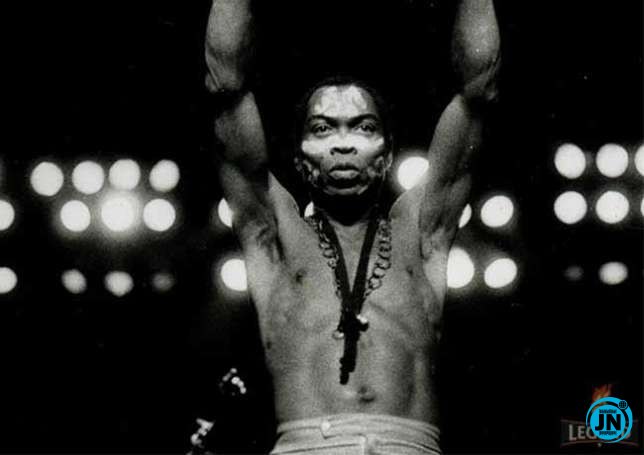 Fela Anikulapo Kuti, Fela Kuti or simply Fela, was a Nigerian multi-instrumentalist, musician, composer, pioneer of the Afrobeat music genre, human rights activist, and political maverick. He has been called “superstar, musician, singer, Panafricanist, polygamist, mystic, legend.” During the height of his popularity, he was often hailed as one of Africa’s most “challenging and charismatic music performers.”

Fela Kuti was born Olufela Olusegun Oludotun Ransome-Kuti on 15 October 1938 in Abeokuta, Ogun State, Nigeria into an upper-middle-class family. His mother, Funmilayo Ransome-Kuti, was a feminist activist in the anti-colonial movement; his father, Reverend Israel Oludotun Ransome-Kuti, an Anglican minister and school principal, was the first president of the Nigeria Union of Teachers. His brothers, Beko Ransome-Kuti and Olikoye Ransome-Kuti, both medical doctors, are well known in Nigeria. Fela is a first cousin to the Nigerian writer and Nobel laureate Wole Soyinka, the first African to win the Nobel Prize for Literature. He died on 2 August 1997.

Now that we know Fela Kuti,  lets also get to know who more details about Burna Boy.

Who is Burna Boy? Damini Ebunoluwa Ogulu better known by his stage name Burna Boy is a Nigerian afro-fusion singer and songwriter.  He rose to fame in 2012 after releasing the lead single “Like to Party” from his debut studio album, L.I.F.E (2013). In 2017, Burna Boy signed with Bad Habit/Atlantic Records in the United States and Warner Group internationally. His third studio album Outside marked his major-label debut.

Burna Boy was born on the 2[sup]nd[/sup] of July, 1991 in Ahaoda, Rivers State, Nigeria. He moved to Lagos State at an early stage of his life and began his music career there. Burna Boy had his early education in the Montessori International School and from there moved to have his secondary education at Corona, Agbara, Lagos State after which he moved to the United Kingdom to complete his studying. Talking about his music career, Burna Boy draws his inspiration from Nigerian legend artist, Fela Kuti. He came into limelight after dropping his hit song, ‘Like To Party‘. The video was directed by Adasa Cookey for the Square ball Media.

Damini’s parents are Samuel Ogulu and Bose Ogulu. He was raised along with her sister called Nissi Ogulu. Burna Boy has attributed his musical success from being raised in a humble background in Nigeria. He came from a nobody musician to an international musician who is now recognized in most continents.

From what we gathered so far, we can see that both Fela Kuti and Burna Boy are from different Backgrounds. But the question still persists:

No, they're not related by Blood. From Burna Boy's Biography it is stated that Burna Boy draws his inspiration from the Legend, Fela Kuti.

It is evident enough that Burna Boy sample alot of Fela Kuti's songs and he doesn't deny that. He has publicly revealed that Fela Kuti is his Idol.

From what JustNaija gathered, we discovered that Burna Boy's Grandfather, the great music critic, Benson Idonije, once managed Fela.

Also from Quora platform, Kaosiso Nwachukwu (a former Blogger) gave more details about the differences of Fela Kuti and Burna. He said:

Although burna claimed to be inspired by fela music but what shows that he is really inspired by fela style apart from that cigar in his hands ? I am a huge fan of burna boy but when it comes to fela's pattern, burna boy isn' even close. Fela stood against the Nigerian Military forces and the death of his mama was the result but burna is a noise maker and only talks very little against those that are the real cause of problems that's why you will get lines like “some people are vampires, I never touch anybody until I see my blood” in his music talking about the street life and how fearless he has become.

He dare not say a line like “buhari no be human being im just dey human skin o” like fela did in his music. Fela is a womanizer and his music is noise (play one to verify it yourself) but he stood for the public. He made known to government what the needs of masses are.

He has a uncommon bravery when it comes to matters that has to be done with guts but permit me to say that this fela we praise is not all that worthy. Although we are not wrong to praise him for being our mouths but he doesn' have moral rights to criticize another for his deeds whatsoever. Fela is stubborn and provocative and just a thing not fit to be shown to our children to emulate.

His relationship with his father is one reason why I said this though. Fela married 23 harlots that dance for him in a day and asked people to stop calling them prostitudes that they are now his wives. He is a spiritual man he said when asked about education but he studied abroad. His character is very unpredictable and fearlessly he insulted everyone in office.

Although he made fun of everyone in office but he really uncovered some truth to the public through his message. He once said “na baba kill dele, if you put am ngida na u sabi” in his music against military leader of armed forces babangida whom masterminded the killing of a veteran journalist Dele Giwa with a parcel bomb that was delivered to Dele by his first son, poor gate man has innocently given it to the kid to give to his father and you could imagine what is the possible outcome of a thing like this during those days.

From the Article, i hope you've learnt one or two things about both superstars. If you love the article above, always visit JustNaija for more and Share this to your Friends.

Photos: Foluke Daramola Takes Her Kids On Vacation To Maryland
Tacha Breaks Down In Tears Because Of Nicki Minaj (Photo)
Harrysong Threatens To Spill Secrets About His Exit From Five Star Music
Actress Tonto Dikeh Has An Advice For Those Buying Flashy Things Without Investments
Comments

What about his mother being a back up dancer for Fala? Any truth in that?

Beef Alert! Ka3na Likes Toyin Lawani Post Slamming BBNaija's Nengi For What She Did Years Ago

#BBNAIJA2020: “Erica Will Be A Slut Outside The House” – Kemi Olunloyo Drops The Bomb (Photo)

#BBNAIJA2020: Drama, As Nengi And Lucy Engages In A Heated Fight (VIDEO)

#BBNAIJA2020: “I Wanted To Kiss You Last Night, And I Meant It” – Dorathy Tells Brighto (VIDEO)

“Leave Nengi Alone, It's Her Choice To Kiss Every Guy In The House, Mind Your Business” – Vee Blasts Lucy (VIDEO)