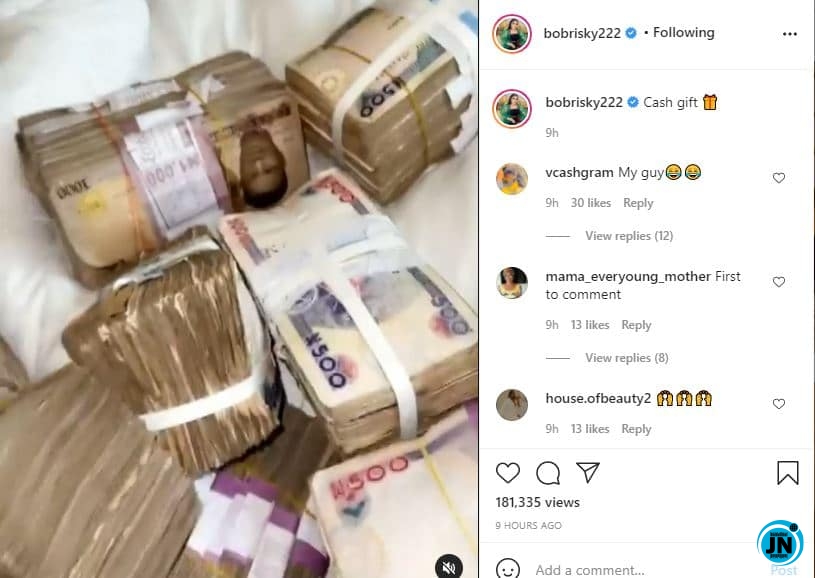 Nigerian cross-dresser Idris Okunneye popularly called Bobrisky has taken to social media to brag about the kind of people he makes friends with as he celebrates his 30th birthday.

Bobrisky, in a video shared on his Instagram page, shows off the wad of cash gifts he received on his birthday.

In the video, Bobrisky said he is excited about his birthday, and gifts have started rolling in for him urging his fans and followers that cash gifts are accepted.

According to Borisky, the bundle of cash was from one person because he does not make friends with broke people.

He captioned the video: Cash gift.

Kemi Filani News recalls that Bobrisky recently clarified why he stopped fighting celebrities and responding to insults from netizens.

This comes a few days after, Bobrisky and his former best friend Tonto Dikeh threw shade at each other, and he dragged Tonto for claiming she is born again yet smokes marijuana.

However, in a recent Instagram post, Bobrisky questioned his fans if they noticed any changes regarding fighting or making trouble online.

Bobrisky said his boyfriend turned on his notification to see all his Instagram posts and warned him never to respond to any insult from his fans, including celebrities. Otherwise, he would end their relationship.

Bobrisky, who would not want to lose his boyfriend, said he has learned to ignore negative comments about him and act as nothing happened.