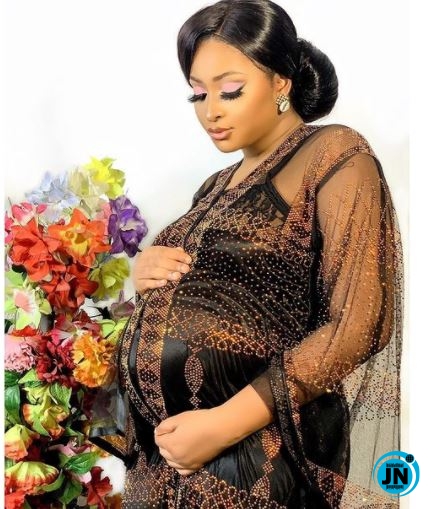 Nollywood actress, Etinosa has left many of her fans in shock after flaunting her baby bump for the first time in months, revealing she is expecting her first child.

The actress after taking to her social media to share a video of her self looking heavily pregnant, took many of her fans who didn’t know she was pregnant aware as she thanked God for the gift of motherhood.

Sharing the videos and photos, Etinosa captioned it;

”This year, i received the best gift ever.. the gift of motherhood.
I am eternally grateful to God #Gratefulheart #yummymummy” 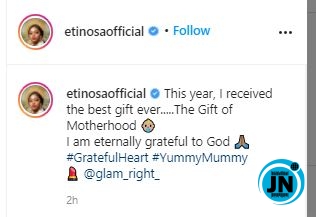 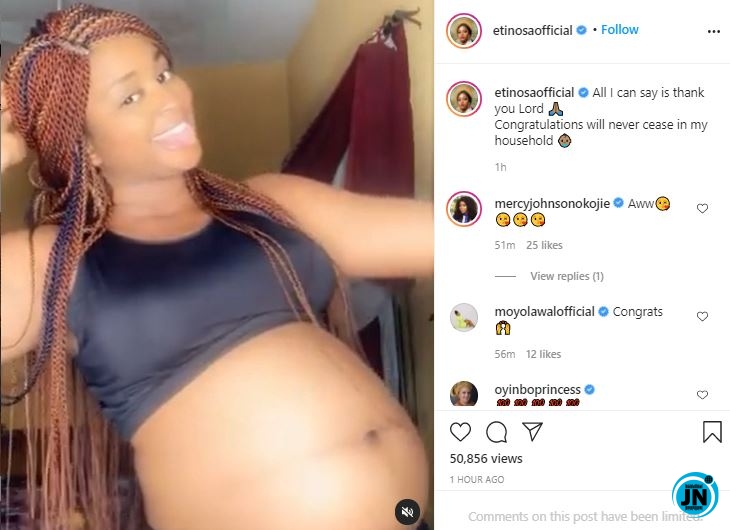 Recall that Nollywood actress, Etinosa has called out her colleague, Stella Damascus for advising women and young girls not to allow a man to disrespect their body during premarital sex.

Reacting to the video; Etinosa via her Instagram stories asserted that lovemaking between two consenting adults shouldn’t be about respect.

”Motivational speakers with ring light, please avoid me.” A man sleeps with a woman without marriage or protection he’s disrespecting her body?? Is she not sleeping with him back? Two lovers, arent they both sleeping with each other?? Which one is disrespect again. That means the woman is disrespecting the man’s body too na. How come the disrespect is to the woman alone?? What even concern respect with lovemaking between two consenting adults sef? Africa!!

Whether you are a man or woman promiscuity is wrong. Don’t make it a woman thing

A single man will sleep with 10girls he’s awesome (even if he’s married) but a single woman sleeps with 3 men its shameful, disrespect. Double standards much!

Let’s end some backwards thinking narrative in 2021 abeg. While some women are fighting this way of thinking, some other women are working so hard to strengthen it and shame their fellow woman. To gain what really? You want to use your fellow woman to do pickmesha”.

Kiddwaya Hints Engagement As Erica Says She Misses Her Husband
Tacha drags Shade Ladipo to filth after she mocked her for celebrating Nicki Minaj following her on IG
Stop relying on celebrities, you didn’t relay on us when you voted in BBNaija – Tiwa Savage says as she joins #EndSARSProtest
DJ Cuppy lands herself a huge deal as she celebrates her 28th birthday