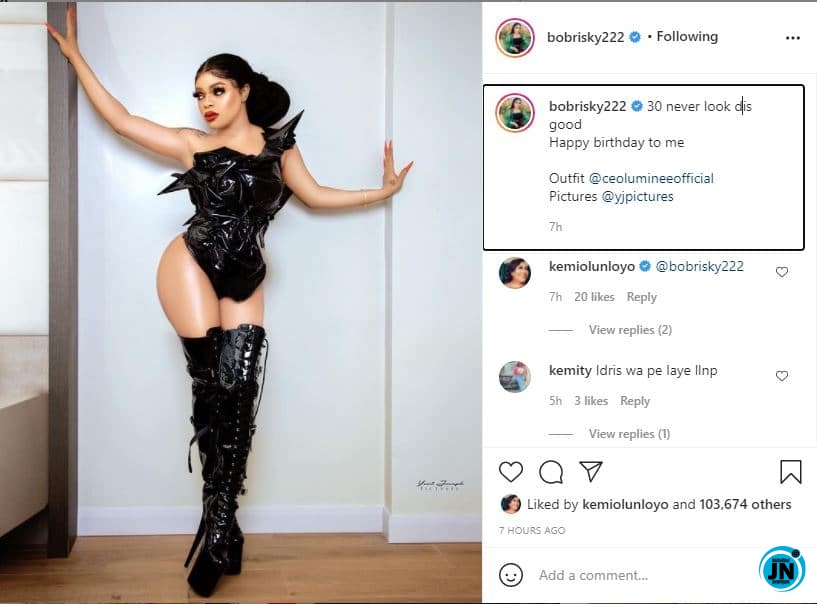 The male barbie a few days ago left many of his fans and followers in awe with several photos of himself stunning in different outfits.

Taking to his Instagram page to share another hot picture of himself, Bobrisky bragged about his age, stating that 3o never looks this good.

He wrote: 30 never look dis good. Happy birthday to me

Kemi  Filani News recalls that Halima Abubarkar mocked Bobrisky, after revealing the amount of money he spent for his luxury 30th birthday party.

In a post shared on Snapchat, Bobrisky said he spent thirty million on invitation cards accompanied with a drink that cost fourteen million for 400 attendees.

Bobrisky declared he is the biggest girl in the country, and ladies should not copy his lifestyle or compete with him.

The popular male barbie added that he bought himself a birthday gift worth 450 million but will not be uploading it until he is done with the interior, which cost over 50 million.

Reacting to this, Halima Abubarkar, who has been at loggerhead with Bobrisky, laughed over the post using an emoji.

Actress Uche Jombo, Reacts To The Signing Of Odion Ighalo By Manchester United
Donald Trump wants to send Americans $1000 each due to economic impact of the coronavirus crisis
“The king is back” – Tonto Dikeh says as she returns to Nollywood
Netizens laud Uche Jombo’s reply to fan who asked her to check up on Genevieve