A journalist and cameraman attached to AriseTV have been reportedly brutalized by members of the Nigerian police while covering and interviewing #EndSARS protesters. 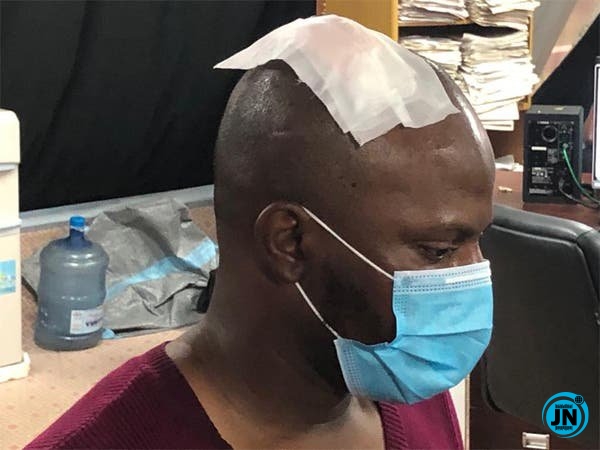 Mr. Francis Ogbonna, a Cameraman with Arise TV was said to have stopped by to gather opinions from #EndSARS protestors while returning from an interview with the Inspector General of Police following the disbandment of SARS.

This is coming barely a few hours after the Inspector General of Police, Mohammed Adamu, dissolved the Special Anti-Robbery Squad (SARS),

Disclosing this via a video clip, Ferdinand Duruoha, a reporter with Arise TV condemned the incident, noting that Francis's head was broken by the officers who attacked them.

Narrating the ordeal Duruoha said: “We took the IG’s message to live on Twitter banning SARS, and on returning from that particular interview, we saw some youth along the road, protesting.

“While we were trying to speak to them and get their takes on the IG’s message, we were attacked by policemen who have brutally assaulted Francis and broke his camera and Arise news camera.

“This is the result of that brutalization. I am about taking him to the hospital but then we just need to get this as a sign of evidence of what the police have done.”

Unbelivable Remarks from Adeboye's Son Leke, As he mocks those whose marriages didn't Last, He did this while celebrating his Parent Own.
“I'm trying to get Rihanna Pregnant” – Wizkid says while responding to a fan
Soldier hits 13-yr-old girl’s head against the wall, rapes her while unconscious
Fans struggle to pick wads of naira notes which Laycon threw in the air while leaving (Video)